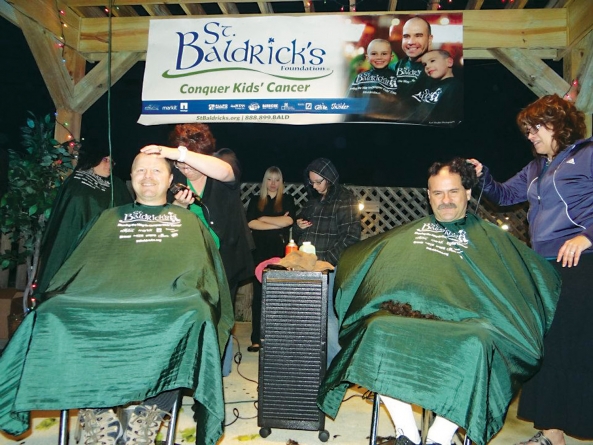 (March 8, 2013) Men and women can have their head shaved for a good cause: to fight childhood cancer.

The Delmarva Emerald Society’s third annual head-shaving event, scheduled for Saturday at Station 7 restaurant, on Route 707 in West Ocean City, is a fundraiser for the St. Baldrick’s Foundation.

The festivities will kick off at 4 p.m. The shaving of the heads will begin around 6 p.m.

Participants have been encouraged to sign up online at www.stbaldricks.org, so donation/sponsorship can be made directly through the Web site.

Those who raise $50 will receive a St. Baldrick’s Foundation T-shirt. Anyone who does not register online, but who still wants to have his or her head shaved, will be welcome on Saturday.

“Quite a few people get caught up in the excitement and want to help out the kids,” said Sean Donovan, a member of the Delmarva Emerald Society’s board of directors and the group’s chaplain. Donovan plans to have his head shaved Saturday. “It’s exciting. Everyone is cheering on the person getting their head shaved.”

The gathering will garner funds for the St. Baldrick’s Foundation, a national charity committed to finding cures for childhood cancers, such as leukemia. Money raised impacts youth who are being treated at more than 215 children’s hospitals throughout the United States.

According to www.stbaldricks.org 175,000 children worldwide are diagnosed with cancer each year, yet research to find a cure is significantly underfunded. People are shaving their heads in Hong Kong and Honolulu and everywhere in between — all with the goal of curing childhood cancer, according to the site.

Events are held in pubs, restaurants, schools, churches, parks, malls, military bases and firehouses, among other locations. St. Baldrick’s head-shaving events began as a challenge between businessmen in 2000. One event grew into more than 1,000.

The local fundraiser is being organized by the Delmarva Emerald Society, a group of career and volunteer firefighters who want to give back to the community. The public is encouraged to attend.

Donations will be accepted, but are not required, at the door. Music will be provided by Clean Getaway and there will be a silent auction and 50/50 raffle during the evening. Food and drink specials will be offered.

Last year, more than two-dozen men, and a few women, had their heads shaved at Station 7 Restaurant in Pittsville, helping to raise more than $6,300 for the St. Baldrick’s Foundation. “The place was packed last year. It’s a pretty uplifting atmosphere because you’re raising money for the kids,” Donovan said.

shaving events have generated more than $30,000 for the foundation the past two years. The fundraising goal for the third annual affair is $10,000. Thirty people have already committed to cutting their locks for the cause this Saturday.