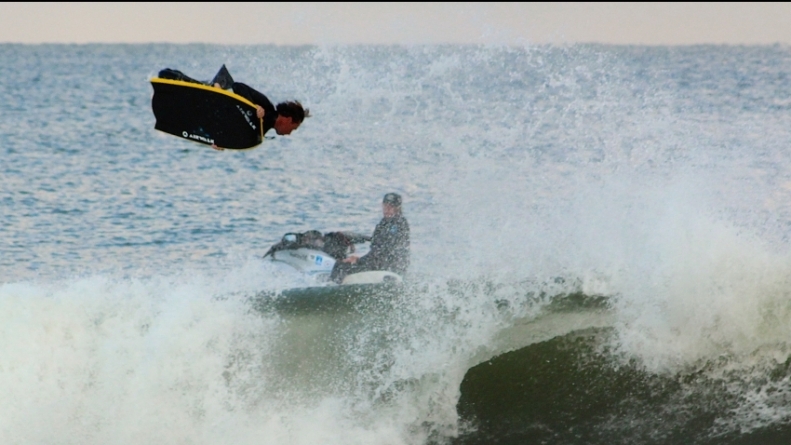 (Feb. 20, 2015) Local professional bodyboarder Brian Stoehr was invited to compete in the North American leg of the month-long inaugural Free Surf World Tour along with 19 other top riders.

“It’s such an honor to be asked by some of the best guys ever in my sport to be a part of this event. Also, it’s a great feeling to be paired with the other guys invited,” Stoehr said. I’m still having just as much fun as I did growing up in Ocean City playing in the water and I can’t believe I still get to spend my days enjoying the ocean like I do.”

Participants have from Feb. 10 to March 10 to catch waves at any location on their leg including the United States, Mexico, Central America and the Caribbean. “The modern, new twist on the World Tour” includes making a one-minute video capturing the best action shots, Stoehr said.

Fans will have the opportunity to cast their opinion and vote on who they think is the best bodyboarder in the competition.

Stoehr will be returning to the World Tour after a couple years hiatus–he had competed in the U.S. Bodyboarding Tour for a number of years. Stoehr is a two-time United States Bodyboard Association Pro Tour champion in the drop knee division, winning in 2008 and 2009. He has finished in the top 10 every year since his professional career began at age 19.

“This was solely invitation based with the best guys in the world competing,” the 35-year-old said. “They are good friends and I am having more fun than ever with the last few events I have done.”

Andre Botha from South Africa and Jeff Hubbard out of Hawaii are some of the favorites in the competition. A number of other countries are represented including Mexico, Costa Rica, Barbados and the Dominican Republic.

Stoehr explained how professional bodyboarding has become even more enjoyable once he allowed worries and stress to eliminate from his daily routine.

“I am enjoying my job and having a blast,” he said. “It’s a blessing to continue getting paid for playing in the ocean.”

Stoehr could choose anywhere to live or pick a location where the waves he needs are always available, but it’s not where he grew up.

“When people think of a professional career in surfing, it’s primarily California or Hawaii,” Stoehr said. “I am one of the few U.S. mainland riders in the competition and it’s an honor to represent Ocean City.”

Stoehr’s main goal, he, said, besides winning, is to capture footage in Ocean City waters.

“It is important to use this opportunity to showcase where I grew up and how great the waves can be at home,” he said. “I am grateful to have grown up here and the waves have always been there.  Ocean City is a top surfing destination and potentially one of the best on the East Coast.”

In addition, Stoehr will head south on the coast for warmer waters and surf on the West Coast as well during the tour.

Currently, Stoehr has a line of bodyboards made by Catch Surf, which is the parent company of Division 71, the brand Stoehr’s signature series boards are made under.

He is excited about his stand-up bodyboard created for the East Coast. It is specifically made for smaller waves commonly found in area surfs.

He is most proud of Worcester County’s endorsement.

“I’ve spend all 15 years of my career talking about how great Worcester County is,” he said. “It’s cool to be featured on videos for commercials and to help promote Worcester County.”