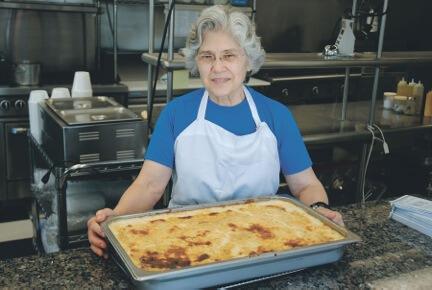 By opening time at 11 a.m., she has a host of homemade dishes from spanakopita and pastitsio to desserts such as baklava and walnut cakes lining the racks ready for customers to arrive at Little Leo’s American & Mediterranean Kitchen.

Though she’s been in the restaurant industry for more than 40 years, she treats her business more like a home kitchen where everything’s made from scratch.

She said she wanted to bring something different to Ocean City when she opened Little Leo’s in May.

“I’m not here to make a million dollars. I’m here to make people happy,” said the restaurant’s owner and chef.

Asked which is her best dish, Kaouris answered: “I put my love in all of them.”

The Greek-American grew up on a dairy farm near the city of Patras, where she started her from-scratch philosophy early in life making her own yogurt. She married Pete Kaouris in 1963, the same year she moved to the United States.

The Kaouris’s got their start in the restaurant industry three years later when they converted a carport in the Maridel Motel into a four-seat stop called the Maridel Coffee Shop. The 40th Street business eventually expanded into the entire first floor, but with brothers and sisters arriving from Greece and the arrival of the Kaouris’s son Leonidas, the family needed more space.

Little Leo’s is an offshoot of the uptown eatery — one that Kaouris has been brainstorming for a long time.

“I wanted for many, many years to do something different,” she said. “It finally came to me.”

Little Leo’s, named after her son, took over the space that formerly housed an array of other restaurants over 50 years, when the Kaouris’s leased the space out. With the addition of an outdoor deck, the eatery was ready to open for summer on May 7.

Kaouris cooks the same Greek dishes she did growing up, adding American fare such as burgers to the mix. Among diner’s favorites are her gyros, chicken souvlaki and chicken subs, all marinated in house.

Customers can take their orders to go from the small carryout shop or eat their hearty portions of moussaka or pastitsio on the deck outside. Some even come back inside after the meal to praise Kaouris’ cooking, she said.

“From 1966 to today, this town has been very, very good to us,” said Kaouris, who still helps her husband run Leo’s Restaurant uptown. “I just want to make people happy.”

Little Leo’s is on 78th Street between The Bayside Skillet and K-Coast Surf Shop. The carryout businesses is open seven days a week, Monday through Saturday from 11 a.m. to 10 p.m. and Sunday from 12 p.m. to 10 p.m.

Kaouris plans to keep the business open through the end of September before closing for the season. Limited outdoor seating is available at the restaurant.

Visit www.littleleos78thstreet.com for a full menu and description of dishes or search for “Little Leo’s American & Mediterranean Kitchen” on Facebook for more information.