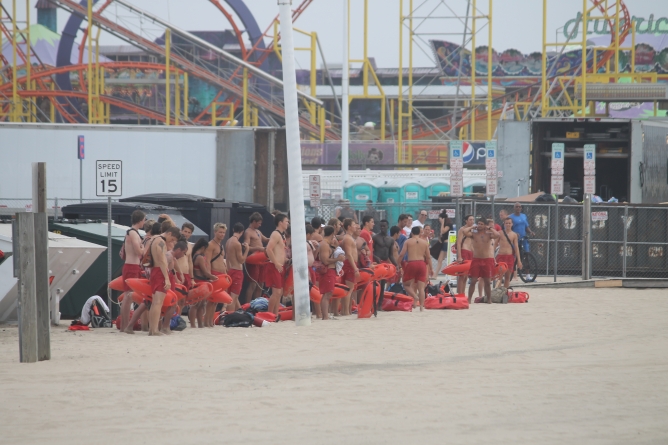 (May 29, 2015) Picture this: driving about 600 miles from Montreal, Canada to Ocean City for a job on the Ocean City Beach Patrol, rolling up to the condominium that had already been paid for via an Internet rental company and then finding that the condominium had been gutted and is unlivable.

Worse still, the rental company responsible for all this apparently does not exist.

This is what happened to Beach Patrol members Sunday night, when a summer housing ad placed on Craigslist by “Ocean City Vacation Rentals Management” turned out to be a scam that cost them $7,000 and their housing for the summer.

Youcef Belrachid was distraught on Tuesday as he wondered where he would be sleeping after his lifeguarding shift ended.

“I have no money to make a deposit on another place and we pay a $1,000 Visa to come here. I love this job. We come back every summer because we love it and to be scammed is a shame,” he said.

Belrachid, along with his brother Rahym, and friends Aude Lemaire- Hamel and Adam Bielawski, were all supposed to live at the Nassau Village in unit 50 on 94th Street this summer, or so they thought.

Now, the Montrealers find themselves at a crossroads as what to do and where to turn.

The Ocean City Police Department could not write a report since the incident did not occur in its jurisdiction, Belrachid said.

The money was sent through PayPal, whose insurance policy does not cover real estate or services. PayPal did file a claim for the group, but if the scammer answers in 10 business days and disputes the charges, PayPal does not investigate and the case is closed, Belrachid said.

“They are not understanding how critical the situation is. I have no money or place to live. How am I supposed to work when I have nowhere to live or no money?” Belrachid asked. “Chances are we will never get the $7,000 back.”

Originally, the friends arrived at their home for the summer and thought it was a mistake. They admit that the situation was suspicious when the owner was not awaiting their arrival with keys and went silent on emails.

The trio (Rahym stayed in Canada) started talking to residents who told them it was odd they were renting a unit that had suffered water damage during the winter and had not been fixed yet.

In addition, residents said the condominiums were only rented weekly and not summer rentals.

At this point, and given the late hour, the three crashed at the Guard House after contacting some friends.

On Monday morning, it became apparent that the Canadians weren’t the only victims of fraud. The scammer had also co-opted some images and logos of the local vacation rental company, Central Reservations, to make its faux ad look more official.

After learning of the situation, Central Reservations informed the lifeguards that it represents Nassau Village and that unit 50 would not be ready until July 4. The company also only does weekly rentals.

In addition to lifting information and pictures from Central Reservations’ website, the fraudulent outfit also took company owner Mark Fritschle’s name to make the Craigslist ad and pretended to be him through emails with the lifeguards.

At first, a $1,000 deposit was sent after the lifeguards received a contract. Suddenly, he said, the supposed landlord wanted all the money up front and claimed it was in the contract.

Belrachid said they were looking at other properties in the area where the money was needed up front in those living spaces and he figured it was common in the United States.

“Scammers know we are not from here. It’s easy to steal identities online and it’s hard to trace, but we are not dropping this. If it keeps happening over and over to people, it means we are not shouting loud enough,” Belrachid said.

There have been helpful people the last couple of days, but Belrachid wishes he could find a solution.

“Maybe we could start a fundraiser to get back some of the money, people could donate anything,” he added. “We are just lifeguards trying to enjoy our summer and things like this shouldn’t happen.”

Beach Patrol Capt. Butch Arbin sees this unfortunate incident as a way to educate and advise employees to ask for help with housing to avoid future scam artists.

“We can verify the housing and make sure it’s a legitimate place,” he added. “Beach Patrol is all about educating and hopefully this story prevents this happening to others.”

That is possible, however, as the OC Vacation Rentals scam has become a major concern of local rental companies, with others, such as Resort Rentals and ReMax Rentals also receiving reports of online misrepresentations.

Robbie Harmon, who manages Central Reservations, said they have received numerous calls about Craigslist ads and have contacted the Federal Trade Commission as a result.

Harmon said she has seen scams before, but people showing up to rent properties with false contracts for locations Central Reservations represents, is a new angle for these scam artists.

She also added for the benefit of any would-be renters that Central Reservations does not post ads on Craigslist or accept PayPal.

“I feel terrible for these folks,” Harmon said.

Donate money to the lifeguards at www.gofundme.com/OCBPlifeguards.