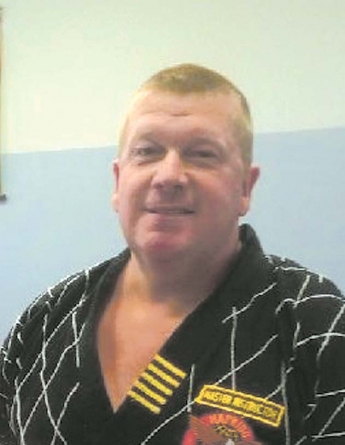 Iannucci has a 30-year culmination of martial arts training and has taught tactical defenses for 15 years.

His course will cover an abundance of information such as defending against an attacker, being able to escape and where and how to run.

Iannucci teaches awareness and prevention. Being aware of surroundings, repetitive daily routines and the demeanor people carry help determine who the attacker will choose as a victim. The first victim’s preyed upon are the weak and unaware.  It is important to keep a heads up and use what’s in the vicinity to fight off an attack, he said.

A woman has many items to work with in her purse and pressing the panic button when walking to the car will alert others to stay away, he said. Defense and distraction are important tools when facing an attacker. Pick an opportunity to strike back or run away.

For example, a victim could pretend to brush her hair back and in the process elbow the attacker in the face. If someone chokes the target from behind, they can remember the “I Dream of Jeanie” head bob and duck under their arms. Iannucci teaches many other examples of how to escape an attack in his class.

Training negates panic and woman fight back wrong on a daily basis, he said. Never say anything to your opponent because screaming plays right into their hands. Begging with an attacker does nothing and remember “a man with his pants down cannot chase you,” he said.

In addition, leaving the windows up and having room to pull out of the parking spot quickly are important suggestions when attacked in a car.

“When I hear about a victim, I always think about how they could have gotten out if it. I’ve been in this business for 20 years and I am getting sick of hearing about all of these people who could have avoided their situations with the right information,” he said. “Come out and give this [class] a shot. It will be well worth your time and money.”

One word to describe Iannucci is intimidating with his tall frame and muscular body.

“Do I look like a person who was bullied?” he asks. Sure enough, Iannucci started taking karate when he was 14 years old because of being “bullied terribly.”

This workshop targets a wide range of people who can benefit from Iannucci’s expertise. Real estate agents are one of the biggest targets for attackers because they are either constantly alone or with strangers.

Iannucci said real estate agents “walk themselves into the perfect scenario for sexual assault or worse. What could be more dangerous than showing a stranger around an empty house?”

Bar and restaurant workers are leaving their jobs late at night when someone could be lurking around the corner. Work safety can be an issue and he teaches how to take weapons like guns and knives away from attackers. Housewives, independent young woman and girls going off to college can all learn valuable information in case they find themselves in a harmful situation.

The workshops can also be a team building exercise for organizations and workplaces.

“Self-defense is karate; you do not need a robe and belt. It is important to work with your attacker’s body and their intentions,” Iannucci said.

He loves the karate schools in the area and thinks they all do a great job with youth. The missing component is a way for adults to learn how to properly defend themselves without taking the time to train and learn karate.

Iannucci has been vacationing in Ocean City for 15 years and bought a property five years ago. Living in Philadelphia and its suburbs his whole life, Iannucci plans to retire on the Eastern Shore. One problem is holding him back—the growing violence occurring down by the beach, he said.

“Everyone is stuck in their own little bubbles until the area changes. I am under no illusions that this is a safe place all the time and it really does not matter where you live,” Iannucci said. “Heroin is on the rise, which causes ultra-paranoia. Home invasions are occurring because they need the next fix, which is a gateway to assaults, rape and even murder.”

The frequency of classes Iannucci offers will be determined according to demand and interest. A few organizations have already reached out to Iannucci and he will go on site if asked.

“I love this area and hope people find what I bring to the table useful. You always have to be ready for ‘what if.’ I can provide the umbrella when the dark cloud shows up,” Iannucci said.

Iannucci’s resume includes seminars taught at schools and to youth groups in Philadelphia to teach youth bullying is not the answer. The “bullyproof” sessions help children realize it is not their fault and to speak up when they see it happening around them. These seminars reflect on his days of being bullied and he likes helping children to not walk around scared.

He also trains bouncers in Philadelphia on the correct measures and procedures they need to take when confronting an unruly customer.

Iannucci has been a tactics instructor for 15 years and has owns Kim’s Karate in Cheltenham, Pa. since 1997. He was Fox News Sports use of force analyst for one year.

“I want people in this area to know it’s available and an option for them. I come down here all the time and figure it is important to teach people accustomed to always keeping their doors open self-defense,” he said. “Remember, anyone can be a target at any time and the three hours fly by because of how much fun we have.”

The workshop will take place from 10 a.m. to 1 p.m. at Hollie’s Treasure Chest, 900 Coastal Highway in Fenwick Island, Del. on Saturday. The cost is $40 for those pre-registered and $50 at the door. Police officers and their family members can take the workshop for free.