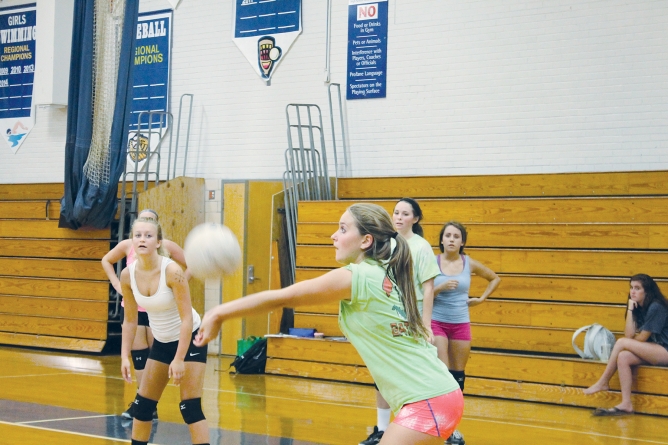 (Sept. 5, 2014) Stephen Decatur volleyball Coach Sarah Purnell (formerly Zimmer) said the Lady Seahawks are talented, they just need to learn to adjust to each other on the court.

“The girls are trying to figure each other out still,” said Purnell, now in her third year coaching the squad.

Of the 11 players on her roster, five are returning from last year when the team went 8-8. The Seahawks lost in first-round action of Section I of the 3A South Regional tournament. The team graduated six seniors, five of whom were starters.

“The girls are trying to get used to each other on the court. Sometimes they get frustrated with themselves,” Purnell said. “We lost some major contributors (to graduation). Some of the girls have stepped up to fill those spots and some are still trying to adjust.”

Purnell said the team has some height this season and several strong players on the front line, including senior Hannah Adkins, the Seahawks’ lone captain.

“Hannah will be a dominant force,” she said. “Hannah’s a quiet leader. She definitely leads by example. She works hard and does everything we ask her to do and more.”

Adkins’ performance during the 2013 season earned her All-Bayside Conference First Team honors. As a four-year player, she is looking forward to leading the Decatur squad this year.

“I think my strongest point is hitting, so hopefully if they can get the pass up I’ll get good hits,” Adkins said. “I’ve been trying to help most of the newcomers as much as I can. A lot of them are good, though. I try to give them as many tips as I can.”

Senior Marina Jones is new to the varsity squad and she will also be a force on the front line, as a middle hitter.

While Adkins is a quiet leader, senior setter Kayla Heinz (2013 All-Bayside Second Team) is more vocal, Purnell said. The coach will look to them, veteran setter Haley Trice, and the other four seniors to run the team.

“We’ve got a little bit of cleanup to do hitting-wise, and passing and serving, but I think we’ll do well this year,” said senior Victoria Williams, a four-year player. “I’d like to at least beat [James M.] Bennett and Parkside once this year…[and] the Bayside championship, that’s always in the back of our heads.”

Added Adkins, “I’d love to win Baysides. I know that might be a high expectation, but I think we can make it. It’s going to take a lot of working hard at practices.”

Purnell said one of the main goals this season is for the players to be consistent.

“Last year was kind of a roller coaster,” she said. “I’m not looking for a perfect season. I just want them to try hard every day at practice and during every game.”