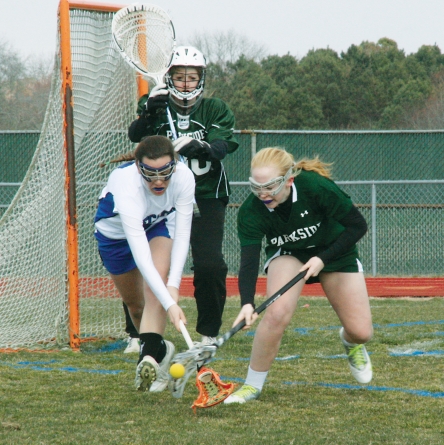 (March 29, 2013) The Stephen Decatur girls’ lacrosse team held off the Parkside Rams’ charge late in the second half of last Friday’s season opener and pulled out a 5-4 victory in Berlin.

The Lady Seahawks got on the board early, when senior Eileen Hayman scored about 20 seconds into the competition.

Junior Sami Quilter gave Decatur a 3-0 advantage with six minutes remaining in the first half.

Parkside cut the lead to two goals 1:50 before the break.

Senior Alexis Martinek put the Seahawks on top 4-1 in the opening minutes of the second half. Payton VanKirk tallied the Berlin squad’s fifth goal about 10 minutes later.

But the Rams didn’t back down. They scored twice then netted a third goal with two minutes left in the game.

Decatur contained Parkside in the final minutes to win 5-4.

“We’re working on a new [motion] offense and when we ran it right, we were open and we scored,” said Decatur Coach Bob Musitano. “Our defense played well the whole game. They seemed to be able to control what Parkside was doing. We just had some trouble clearing the ball and we let them get two easy goals at the end.”

Senior Skylar Siegfried played in goal the first half and stopped five Parkside shots. Sophomore Jillian Petito took over in the second half and made five saves.

Overall, Musitano was pleased with the team’s first outing as the girls are still getting used to playing with each other, he said.

The Seahawks will travel to Salisbury to play the James M. Bennett Clippers on Wednesday.