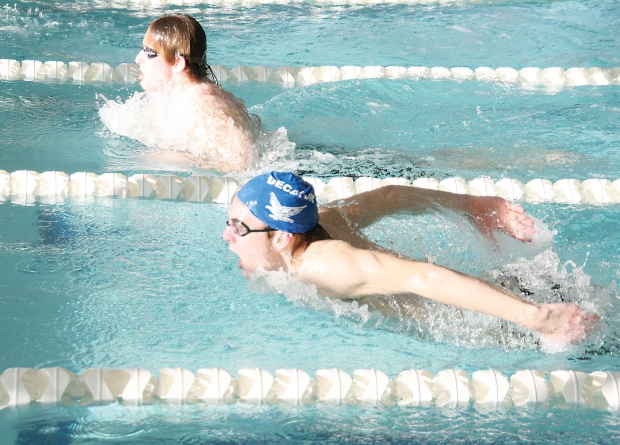 (Feb. 22, 2013) Jenny Miller, coach of the Stephen Decatur girl’s swim team, was confident prior to last Saturday’s 3A/2A/1A East Regional competition that the Lady Seahawks would be a contender for the title.

The squad held a lead throughout the entire meet at the Arundel Swim Center, finishing with 303 points to take home the coveted award. Easton finished in second place with 259 points.

“It was a lot of good racing and a lot of best times. They were very happy overall with winning and getting that plaque,” Miller said.

The top three finishers in each regional event qualified for the 3A/2A/1A state championship, scheduled for Saturday at Eppley Recreation Center on the University of Maryland-College Park campus. Individual competitors or relay teams who, in their regional meet, were among the next top-12 statewide times also qualified for states.

Because of her regional time, sophomore Molly Wooten (200 freestyle, fifth, 2:17.71) earned a spot at states, as well.

The girls’ 200-yard medley team of Wellen, Deickman, Williams and Tinus finished fourth at regionals, but their time of 2:09.46 was good enough to advance them to the state meet.

Wooten, Zweifel, Williams and freshman Marley Rakow placed fourth in the 400-yard freestyle relay race. Their time of 4:20.25 secured them a spot at states.

“I’m proud of the team and how we preformed at regionals. At states, we just need to persevere and give it everything we have,” Wellen said.

The Decatur boys’ team was competing for its third consecutive regional title, but came up a bit short.

“Basically, it came down to one event and we did not come out on top. I think the seniors were more disappointed than anyone else because they won it the past two years,” said Coach Damien Sanzotti. “They preformed really well. Every single one of them dropped time.”

Because of top three performances during the regional meet, Custodio (200 IM, second, 2:04.92) and junior Collin Bankert (100 freestyle, third, 55.35 seconds) automatically advanced to states in their events.

Senior captain Jeff Middleton will join his teammates for the state competition because of his regional times. He placed fourth in the 100-yard backstroke (1:01.88) and sixth in the 500-yard freestyle (5:51.53).

“I want to do whatever I can for my team. Make myself better to hopefully impact them a little bit,” Middleton said. “We had a good team this year and we’ve been closer than ever. I’m proud of how everyone stepped up.”

Bankert took fifth in the regional breaststroke event and his time of 1:12.63 earned him a stop at states.

The boys’ 200-yard medley relay team of the Middletons, Custodio and Poole finished in fourth place, but their time of 1:52.83 was good enough to qualify the group for states.