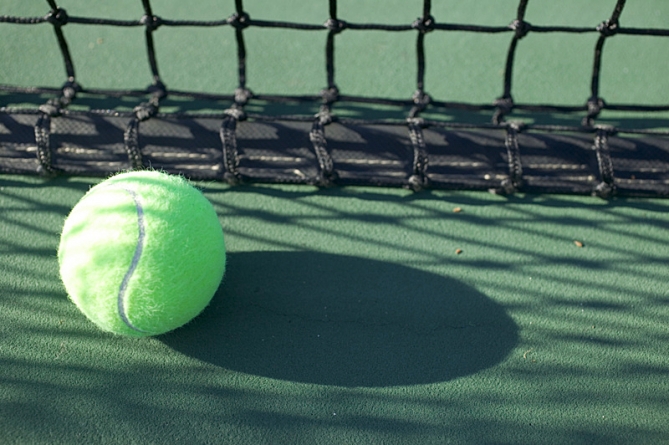 (April 4, 2014) The Worcester Prep Lady Mallards pulled out a 4-3 victory over the James M. Bennett Clippers tennis team of the Bayside Conference in Salisbury on Monday.

“I was so proud of the girls,” said Prep Coach Cyndee Hudson. The Mallards compete in the Eastern Shore Independent Athletic Conference. “We had a slow start with [junior] Tatjana [Kondraschow] losing first singles by 5-8, and [sophomore] Sonya Walker at second [5-8].”

“Third singles, [senior] Hannah Esham also lost 2-8, so we were behind 1-3. Everyone else battled back from deficits to claim victories,” Hudson said.

“Second doubles were now the only match still playing. It went back and forth to be 5-all. My girls [junior Natalie Twilley and sophomore Erika Smith] then went on to win, 8-5,” Hudson said.

Hudson said she and the Mallards were “very happy” after the victory.

“Since we have only had two full practices, we really didn’t know how we would stack up against Bennett,” she said. “They are traditionally one of our toughest opponents. This is a big win (we split with them last year) and we will improve upon those performances to go into the rest of the season.”

“Though the temperature began to creep up into the 50s, the story of the day was once again the 20-25 mph winds that impacted play for both teams, but the Clippers proved more consistent in the difficult conditions,” said Prep Coach Keith Coleman. “The most positive take away is the way some of the boys chose to grind it out and stay in the match and, hopefully, the others will recognize you have to make changes and adjust to the conditions.”

Several matches were close, but senior Chase Schmehling scored the Mallards’ only victory. He topped his second singles opponent, 8-5.

“Schmehling came back from a 5-4 deficit to capture four consecutive games and gain the lone point,” Coleman said.

“[Junior] Kyle Chandler was on the verge of a similar comeback [at fifth singles], but ran out of steam in another hard-fought 10-8 loss. [Senior] Daniel Rosa and [junior] Chris Choy managed to stay in their [first doubles] match until a break of serve at 6-6 cost them an 8-6 defeat…The Mallard netters will need to be more consistent to get back in the win column.”