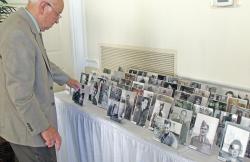 Korean War veteran Bill Weicker looks at photos of fellow soldiers who have passed away. The display was part of a reunion event at the Dunes Manor.OCEAN CITY TODAY/NANCY POWELL(Oct. 12, 2012) A group of veterans reminisced this week in Ocean City about their times in Germany in service to their country during the Korean War.

For several decades, they have had annual reunions to renew friendships, talk about old times and remember those of their group who have passed away.

The reunions started in 1954 in Bethel Park, Pa., recalled Bill Weicker, 83, of Philadelphia, Pa. They have since been held up and down the Eastern seaboard, but most were held in Ocean Pines at the home of John Stephanos.

They get together, said Harry Renton, 83, of Herndon, Va., “because we became a close-knit, organized group. We traveled and learned the Army way and went together to Germany.”

Harry Renton holds his flag before the start of the memorial service at the Dunes Manor on Wednesday.OCEAN CITY TODAY/NANCY POWELLThey were at Ft. Meade when they got three-day passes to go home to tell their families they would be going to Korea. But a similar group in Texas went to Korea and so Renton and the other members of the 66th Eng. Topographical Co. were sent to Germany.

“We made maps,” Renton said. “Anytime the Russians moved their troops, we made a map showing where they moved. We got photos from airplanes and printed them on overlays for the Army

“We had a wonderful time in the Army,” Renton said. “We did everything the Army told us to do. We stayed together the entire time and promised to stay in touch, and we’ve done that for almost 60 years.”

During Wednesday’s memorial service and dinner, photographs of the men who have passed away were displayed on a table and each was remembered with love and dignity.

Over the years, their group has dwindled from 130 to 55. A group of about 30, including wives, gathered for the fifth and final time this week at the Dunes Manor in Ocean City. Although it is their final time at the Dunes Manor, the memorial services will not end. Next year’s reunion is planned for Herndon, Va.