(Feb. 27, 2015) Heather Byrd has been courageously fighting acute lymphoblastic leukemia since she was 16 years old.

Now, eight years later, she finds herself at a crossroads. With her health declining, the will to see more of the world and cross items off her bucket list has become a main priority.

Friends have put together a fundraiser slated for Thursday, March 12 from 6-10 p.m. at the Greene Turtle on 116th Street to help raise money for Byrd’s dream trip to see the Redwood Forest in California, and time is of the essence.

In addition, organizers are asking local businesses to donate items for auctions to be held during the event.

Before her diagnosis in October 2007, Byrd was living in her hometown of Baltimore, attending high school and dabbling in modeling.

“I like creating the photos, especially theme photos where I get to dress up. It’s a great way to tell a story and have a creative outlook,” Byrd said.

After chemotherapy, Byrd spent two years cancer-free and met her fiancé, Cory Anderson, in 2009, before relapsing.

“He was there through everything and even quit his job,” Byrd said. “For almost an entire year he was living at the hospital to be with me.”

In 2012, Byrd needed a change of scenery and moved to Ocean City.

She was in remission for a little over a year and awaiting a stem cell transplant when the cancer came back for the third time this past November.

Pneumonia sent Byrd to the hospital and she battled the illness for about a month.

By January, Byrd was receiving her last round of experimental treatments at Johns Hopkins in Baltimore, hoping it would combat the cancer.

Unfortunately, the treatments did not work. Her cancer continues to spread and Byrd was left to think about the quality of time she has left after being sent home from the hospital this past weekend.

Cancer has brought Byrd closer to her family, especially her brother, Jon, she said.

“We had different lifestyles and friends growing up,” Byrd said. “He had a baby, I became an aunt for the first time and the cancer brought us all closer together.”

Before relapsing, Jon had everything worked out to be Byrd’s donor.

He was the one who suggested she make a Go Fund Me page to help raise money for her California trip. As of Wednesday at press time and four days in, she has raised $4,435.

She could not believe $700 was donated in one day and she is appreciative of the people who are helping her dreams come true, Byrd said Monday.

On Tuesday, an anonymous donor gave $1,015 and the Pink Ribbon Pinups, a non-profit organization that raises money for those battling cancer in the area, contributed $500 toward her California dream trip.

Byrd continued to model after her diagnosis and multiple relapses, boldly posing without hair in a number of photographs.

She has modeled for a number of local photographers, but her proudest photographs come from a March 2014 Survivor Glam Squad and Modern Salon shoot.

Byrd met Robyn Baker through fate on Facebook about a month ago. Baker was selling a tablet through the OC Exchange on the social media site and Byrd was one of a few responders.

Unbeknownst to Baker, Byrd had worked at OC Steamers in Ocean City with Baker’s daughter, Cassie, the past two summers and they had become friends.

After discovering Byrd had her tablet stolen at Johns Hopkins where she was receiving cancer treatments, Baker gave her the device for free and a new friendship was formed.

Baker and Byrd have both expressed how they believe their union is for a reason.

“I have been obsessed with California since I was young, have never been on the other side of the United States and would love to leave the East Coast,” Byrd said. “California is so beautiful from seeing it on television and in the movies.”

Byrd wants to skydive, in addition to knocking a few other life experiences off her bucket list, including visiting places she has never been to.

Most importantly, Byrd and her fiancé have been dating for five years and they plan to marry soon. Donations will also help make that possible.

To donate go to Byrd’s page at www.gofundme.com/walkthedream. 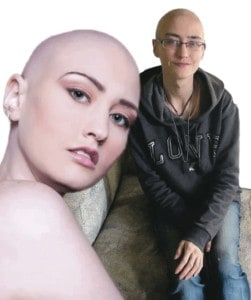 In the picture on the left, Byrd models for a

local photographer in the beginning of 2013

and on the right, she poses for a picture this

past week at her apartment in Ocean City.