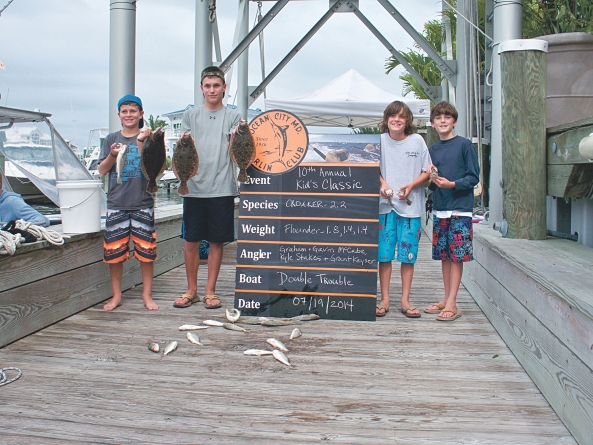 “They caught countless fish, everything from flounder to spot to croaker to tuna, dolphin and marlin,” said Pat Svehla, who co-chairs the Classic with Bill Regan and Annette Cropper. Amanda Shick, operations manager/event coordinator for the Ocean City Marlin Club, also helps organize the event. “Amanda works tirelessly to put this together. She always goes above and beyond.”

Svehla and Regan started the Classic after they looked at the annual tournament schedule and realized there was no event that recognized young anglers. They wanted to create a tournament to introduce youngsters to fishing that would interest them at an early age. The fishing event is open to junior anglers ages 19 and younger.

Every angler received an award for participating in the contest, held July 19-20. Catches were weighed at Sunset Marina in West Ocean City. Those with the top three heaviest fish in each species category as well as billfish release were presented with additional awards during Sunday’s carnival and banquet.

Participants fished from aboard 50 boats. Anglers without access to a boat had the opportunity to fish from areas including the surf, Route 50 bridge, fishing piers in Ocean City and Assateague Island.

Proceeds from the tournament benefit the Wish-A-Fish Foundation. Its mission is to “provide a little relief for a family from the daily stress of having a child with special needs, such as a life-threatening illness, mental or physical disability, by taking the entire family out for a day of fun and fishing on the water.”

“Everyone had a ball,” said Frank Goodhart, coordinator of Wish-A-Fish fishing. “All of the kids had a great time.”

The young anglers reeled in more than 300 fish and Svehla said 170 of them were croaker.

“That was all in a half-day of fishing,” he said. “They had a very active fishing day.”

Goodhart said $3,750 was presented to the organization during the awards cookout. Another $2,500 will also be donated. Wish-A-Fish will receive a total of $6,250 through corporate sponsors, service organizations, private donors and tournament participants.