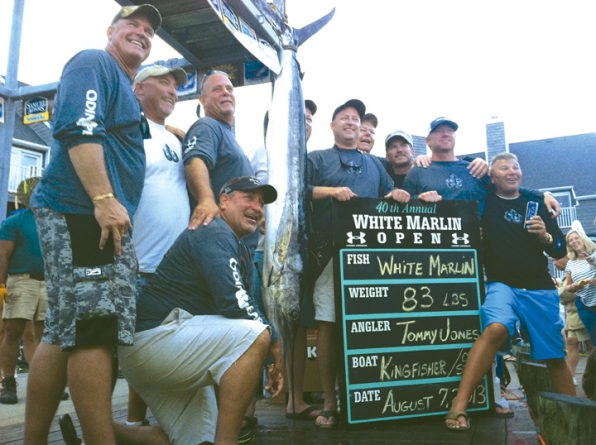 (Aug. 9, 2013) After four days of weigh-ins, at the close of the Harbour Island Marina scale Thursday night, an 83-pound white marlin held the top spot in the coveted division during the 40th annual White Marlin Open.

Just before 8p.m. on Wednesday, the OdinSpear arrived at the 14th Street scale with Tommy Jones’ white marlin on board. As the numbers on the scale rose, the cheers from the crowd grew louder. The scale stopped at 83 pounds and the fish took over first place.

Based on the crew’s estimations, they thought the marlin would be in the high 70-pound range. Needless to say, they were beyond thrilled it weighed in at 83 pounds.

“The fish was pretty big in it’s girth…fortunately we had a fat fish so it worked out great in our favor,” Jones said.

He fought the marlin for about 40 minutes.

“The fish fought hard and I knew it was a big fish,” he said. “He took a couple runs, but fortunately we were finally able to get him on the boat.”

Jones has been fishing in the White Marlin Open for more than 20 years. He won third place in 2010 for an 80.5-pound white marlin.

“It doesn’t get better than this,” he said at Wednesday’s close.

“I’ve been waiting for this all my life,” he said.

Before the marlin was weighed, three 77-pound whites were tied for first place.

According to tiebreaker rules, anglers who do not use a gaff (a pole with a sharp hook on the end that is used to stab a large fish and then lift it into the boat) is declared the winner. A gaff was not used to get McCann’s and McKinley’s marlin onto their respective boats. It was used to on Duffie’s fish.

Tournament co-Director Jim Motsko said the rule was implemented years ago when there was a rumor that anglers were gaffing fish, bringing them on board and if they were too small they were throwing the marlin back into the water.

On Thursday, Richard Kornahrens landed a 77-pound white aboard Lights Out. The fish was not gaffed.

As of Friday morning, McCann’s, McKinley’s and  Kornahrens’ fish were all worth an estimated $50,000.

After four days of fishing, no qualifying blue marlin had been weighed.

The tuna division was action packed all week. Mark Donohue took over first place Thursday with a 261.5-pound bigeye. The potential payout is $360,000.

Michael AJamian reeled in a 255.5-pound bigeye aboard Goin In Deep on Thursday, good for second place. It could bring in $60,000.

Jeremy Gers’ 248.5 pounder, caught on Mia Joes on Tuesday, dropped into third place. The estimated payout for the bigeye as of Friday morning was $24,000.

The Ocean Dan-Sar’s John Coleman could win $19,000 for his 148.5-pound tuna for participation in the small boat (36 feet and smaller) calcutta.

In the dolphin division, Why Knot angler Jeff Collins was in first place Thursday night with a 34 pounder he caught Wednesday, potentially worth $14,000. Bill Gerlach’s 33 pounder he landed Wednesday on Billfisher was in second place and worth an estimated $3,000.

Glenn Orr hooked a 30.5-pound dolphin aboard G Force on Thursday to take over third place. The estimated prize money for the fish is $12,000.

The wahoo leader board changed Thursday. John Simmonds reeled in a 70-pound wahoo on Streaker, good for first place and possibly $20,000.

Aquadance angler Brian Schlosser’s 57.5 pounder caught Thursday is in second place and estimated to be worth $3,000. Mark Wittstadt boated a 49.5 pounder, good for third place and possibly a $2,000 payout for him and his Knot Tell’n teammates.

James Shenk reeled in a 41-pound wahoo while fishing on Heavy Metal on Tuesday. The fish dropped into fourth place but it is potentially worth $20,000 (daily meatfish calcutta).

The only shark landed before Thursday weighed 133.5 pounds. Mike Peet caught the mako aboard No Quarter on Monday. The team could pocket $4,000 if it remains in first place.

Joseph West landed a 131-pound mako on Thursday aboard Cotton Picker. It is estimated to be worth $3,000.

A total of 262 boats are entered in the tournament. The estimated payout is $2.4 million.

“The tournament is going really well,” Motsko said Thursday morning. “Who would have ever thought there would be a three-way tie for first place with three 77-pounders and they we’d get an 83-pound marlin to take over first place.”

The final day of fishing is today, Friday. Thirty-eight boats are fishing. Weigh-ins are from 4-9:15 p.m. at Harbour Island Marina on 14th Street. There is no cost to attend the weigh-ins.