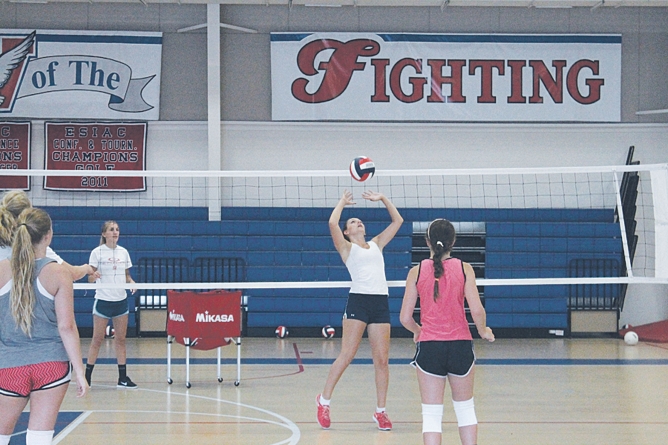 (Aug. 29, 2014) This is the fourth year Worcester Prep will be offering a volleyball program. When it was first launched, not one of the Lady Mallards had much, if any experience playing the sport.

A majority of the girls competing this year for new Head Coach Kristin Jehle have several years of experience under their belts.

Seven of the Mallards on Jehle’s nine-player roster are veterans.

“The program started my freshman year so I’ve been on the team the whole time. It’s fun to see how everyone’s grown,” senior Mattie Maull said after Monday’s practice. “We’ve only had about a week of practice, but I think we’re looking good so far.”

Maull said she is looking forward to getting back on the court after missing most of the 2013 season with a broken finger.

“It’s my last hurrah so I’m pretty excited,” Maull said. “It’s amazing (having Jehle as a coach). This is the best that it’s been. The chemistry between the girls and the coaches, we all mesh well and I think we’re taking direction well from them.”

Also returning to the court for their senior year is setter Cecily Sass and Michelle Curtis.

Jehle said all three seniors have stepped up as team leaders.

Juniors Bridget Brown, Erika Smith and Madison Doody are also back to compete along with sophomore Amy Lizas.

“It’s been fun so far. It’s going to be a good season,” said Lizas, a two-year member of the team. “[Jehle] has helped us a lot with our skills. She knows how we play and she can teach us things that will make us better.”

Freshmen Lily Belle Baker and Caroline Pasquariello have joined the squad this year.

Jehle played volleyball for Salisbury University from 2009-2012. She was an assistant coach for the team during the 2013-14 season.

Jehle said she contacted Worcester Prep’s Director of Athletics, Matt McGinnis to see if the school was in need of a volleyball coach. There was a position available and Jehle was thrilled to take it. She will be assisted by Charlene Fischer.

“I’m very excited. There’s a lot of new talent and hopefully we can build the program,” Jehle said. “Because I’m young, I feel like I can relate to the players.”

Jehle said as a player, she never responded well to coaches who yelled. She believes in positive encouragement and helping players learn from their mistakes. She wants her players to feel calm and relaxed.

“The sport is based on skill and you have to be patient with them,” she said.

The transition has been fairly easy coming in as a new coach, Jehle said, although coaching a high school team is different from a college-level squad.

“They’re still learning and growing as players and I just have to explain things a little more,” she said.

She had worked with several Worcester players during camps and clinics at Salisbury University so it also made it easier seeing some familiar faces when pre-season began Aug. 18.

The Mallards have shown improvement in just a short amount of time. Jehle said she was impressed with her players’ performance during a recent scrimmage.

She expects the girls to have positive attitudes and give it their all, 100 percent. Jehle wants them to learn and soak in all the information she provides.

“They will get better the more they practice and the more they test themselves,” she said. “The goal is for them to understand the game of volleyball, improve their volleyball knowledge, see the bigger picture and keep improving as players and as a team. By the end of the season, I hope they’re meshing well and connecting as a team.”

Last year the team’s season came to an end in the semifinal round of the Peninsula Athletic Christian Conference tournament. The squad lost 11 matches before winning the final two if the 2013 regular season. Maull and Lizas said the Mallards hope to win more matches this season.