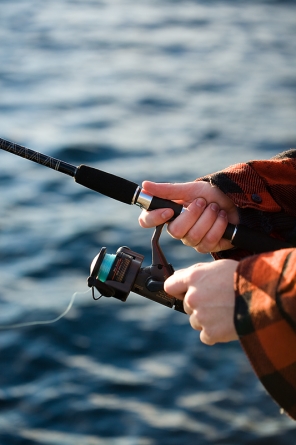 (July 18, 2014) Nearly 100 years ago, the Talbot Street Pier was bustling with activity as anglers weighed their daily catches in downtown Ocean City.

Organizers of the inaugural Big Fish Classic want to bring the action, and big fish, back to the pier.

“I think it’s going to be a great event,” said Sean Welsh, co-organizer of the Classic with Brian Roberts and Stephen and John Lewis.

“There’s all that history there. Everything happened there. It was the place where marlin and tuna were weighed for years,” Roberts said. “We wanted to do something in downtown Ocean City and what better way then to bring big fish to the dock.”

Organizers are expecting between 50 and 75 boats to participate, Welsh said.

More than a dozen had already registered as of Monday and Welsh said a number of other boat captains and anglers have said they plan to compete.

Participants can fish overnight, for the full 32 hours of the tournament, or head out Saturday morning and return in the evening then go back offshore Sunday morning with the same or a different crew.

Boats can depart from any port between New Jersey and Virginia. Teams must fish within 100 nautical miles of Ocean City. All tournament fish must be weighed at the Talbot Street Pier.

Weigh-ins are free and open to the public. There will be live musical entertainment daily at M.R. Ducks and the Angler.

According to www.bigfish-classic.com, “The 2014 Big Fish Classic follows the tradition to bring the heaviest fish from the Atlantic back to the dock…”

“It’s a real relaxed format for captains and anglers…We wanted to have a tournament for everybody that’s reasonable to get into,” Roberts said. “The goal is to get the biggest fish back to the dock.”

The cost to enter the tournament is $700 per boat. Guaranteed prize money is $20,000. There are also several added entry level divisions, or wagering pools, which range in cost from $100 to $1,000.

Optional entry divisions include heaviest fish, “Saturday on the Board” (SOB) for heaviest fish that day, billfish, tuna, meatfish and small boat–36 feet and smaller.

An awards banquet is scheduled for July 27, from 8-10 p.m. at the Angler Restaurant, adjacent to M.R. Ducks on Talbot Street.

Tournament proceeds and money raised through raffles will benefit Coastal Hospice and Diakonia, a residence in West Ocean City, which provides emergency and transitional housing, food services, counseling and assistance to its guests.

“I’m really excited about the tournament. I think it’s going to be an awesome event,” Roberts said.