If you are in Ocean City this week, you may notice a couple of changes as you drive down Coastal Highway. The speed limit, normally 40 mph through North Ocean City, has been reduced to 30 mph, and Downtown, the speed limit has also been reduced. This is due to the expected, unauthorized H2Oi Pop-Up Rally.  It is reasonable to expect heavier than usual traffic, noise and strict enforcement of vehicle laws during the week and weekend.

FOLLOWING IS A NEWS RELEASE FROM THE TOWN OF OCEAN CITY, OFFICE OF EMERGENCY MANAGEMENT REGARDING PREPARATIONS IN THE FACE OF HURRICANE IRENE:

All persons other than identified emergency personnel are ordered to evacuate.
Visitors are asked to return to their principle residences. Ocean City residents are
asked to seek shelter elsewhere.

Utilizing the authority under a local State of Emergency, the Mayor is banning the
sale of all alcohol in Ocean City and requests that all businesses close beginning at
midnight.

All incoming traffic to Ocean City, Maryland, will be limited to emergency personnel.
No other vehicles will be permitted entry to the island, except by approved authority
(Mayor, City Manager and Emergency Services Director).

Ocean City is expected to receive a significant impact from Hurricane Irene.

Easterly gale force winds should start affecting the area on Saturday, August 27 at 5p.m. with hurricane-force winds arriving around 4 a.m. and lasting for a period of eight
hours. The highest wind speeds from Hurricane Irene should occur near 9 a.m. when
top sustained winds, from the north, could reach 90 mph with gusts near 120 mph.
Winds should decrease below hurricane force shortly thereafter.

Sustained winds will fall below gale force after 3 p.m. and generally be from the north
during this period of decreasing winds. Expect gusts above gale force level for several
more hours thereafter.

The total rainfall for the Ocean City area over the next three days is forecast to be
9.5 inches. This can vary significantly as tropical storm and hurricane rainfall is very
difficult to predict.

Storm surge is expected to be six-feet above normal high tide cycles resulting in
significant flooding in low-lying areas.

Recorded Storm Updates:
The Town of Ocean City has several resources that will help you keep track of the storm and how it may impact you, whether you are a resident or visitor.  The telephone number for the  Town’s storm update is 410-723-6666.  Keep monitoring the situation, however, so you are informed and prepared.

Hotel Information:
Many of you have reservations already in Ocean City. If you have reservations over the weekend or the days following the storm you are advised to contact your hotel for further instructions.    Check with your hotel directly to see what you need to do.   OceanCity.com’s Hotel Guide has many of the phone numbers you need.  You will need to search for your hotel by clicking on the appropriate alphabet tiles at the top. Once you have located your hotel, click on the “more info” tab at the bottom of the listing.

This will take you to the hotel detail page where you will fine a “view telephone” link below the logo or photo of your hotel. 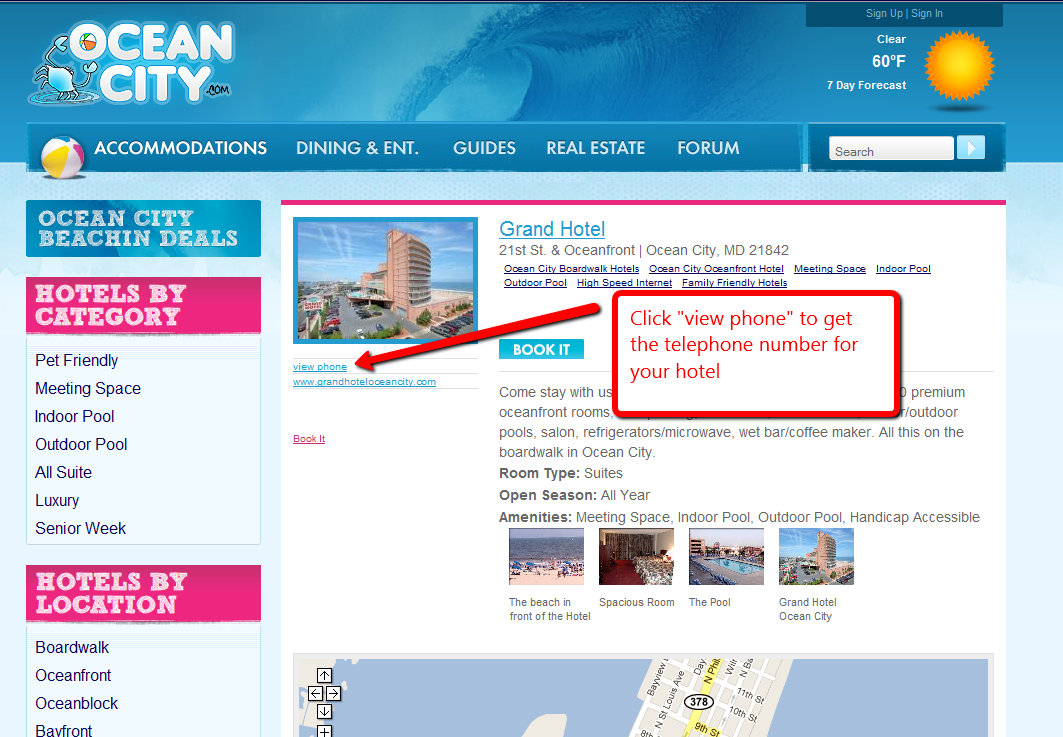 Emergency Preparedness:
There is an excellent article written by Joe Theobald, the Director of Emergency Services for the Town of Ocean City.  If you click on the link above, it will take you to the Town’s site.  This article has the following information in addition to definitions, history, etc.:

The Weather.com site has some good background information on hurricanes and how  the National Hurricane Center defines the storms and issues warnings.  Click here to read about “How Will You Be Warned.”  Another good resource from the Weather Channel website is “Be Prepared in Advance.”  It gives you very good advice about proper planning in the event of a storm.  Remember, it’s not just a Boy Scout adage:  BE PREPARED!

View Our Guide to Assateague
Previous articleWhat to do in Late August in Ocean City while SAVING MONEY:
Next articleTown of Ocean City’s Message on Hurricane Irene

A Guide to the 17 Parks in Ocean City

OC BikeFest and Delmarva Bike Week Are Back for...

A Guide to the 17 Parks in Ocean City

Things to do in the Off Season in Ocean City