Even though human development can be pretty rough, it should come as no surprise that they aren’t going anywhere any time soon.

That’s an 11 percent increase from last year, when surveyors found less than 32,000 horseshoe crabs. The data indicates an increase in horseshoe crab spawning throughout Maryland’s coastal waters since the inaugural survey in 2006 and commercial harvest restrictions are working to increase local horseshoe crab populations.

Volunteers and Coastal Bays staff collected surveys at North Assateague Island bayside; Skimmer Island near the Route 50 bridge; the Oceanic Motel at the inlet; Gudelsky Park in West Ocean City, and Sunset Island on 67th Street. This year, the two sites on Skimmer Island had the largest populations of spawning crabs, primarily because dredging has expanded that spawning area over the past three years.

“The results indicate that we are experiencing more spawning nearly every year, which is good news for crab abundance and, by extension, good news for everyone because the crab is relied upon for biomedical and bait uses,” said Carol Cain, Technical Coordinator for Maryland Coastal Bays. “Additionally, we speculate that an increase in crabs is a good indicator of water quality.”

Horseshoe crabs and their eggs are a significant food source for sharks, turtles and birds. After spawning, waves cause eggs to wash en-masse out of nests and collect in the wrack line, where the water meets the shore. Fish and birds then feed on the eggs, which are an integral part of their diet.

Every year, thousands of shorebirds take a pit stop to the Eastern Shore to feast on horseshoe crab eggs. The crabs themselves are constantly harvested for bait and biomedical uses, thanks to anti-viral and anti-cancer components in their blue blood.

Conchs and eels are also drawn to horseshoe crab bait. It is important to make sure the population continues to thrive through surveys, research and harvest records for these reasons, Cain said.

Spawning generally occurs between May and July along the Atlantic coast, peaking in June in Maryland. Volunteers and staff from the Coastal Bays Program completed the surveys between May and July to capture peak spawning activity, often taking to the beach during the full moon when the crabs are most active.

In the last decade, the surveys have shown a gradual increase in male to female ratios. In 2014, for example, there were 5.2 males to every female horseshoe crab, helping to maintain genetic diversity and population health.

The Maryland Coastal Bays Program conducts its horseshoe crab survey every year and is looking for volunteers who live nearby and are willing to commit to sampling throughout the duration of the summer survey. They have received many offers of help for one or two evenings where people are visiting from out of town, but that makes training and conducting the survey more difficult, Cain said.

“Nature is marvelous and I enjoy taking part in this survey,” she said. “It reminds me of how important it is to share the world and make sure we do not develop every square inch of habitat.” 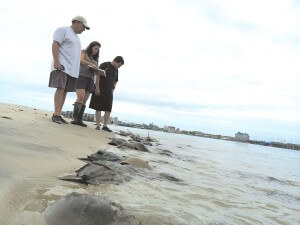 Steve Doctor, of the Maryland Department

of Natural Resources, left, with Carol Cain and

the Route 50 bridge in July.