When you’re at the bars in Ocean City ordering a beer, look for a new tap on the draft arm. Evolution Craft Brewing Company is a local brewery that is becoming a big deal on the Eastern Shore. Located in Delmar, DE, EVO beers are popular with Ocean City locals because it’s brewed in our backyards and vacationers because it’s different than all of the other beers on tap.

Evolution Craft Brewing Company is a small batch brewery that specializes in producing well balanced, handcrafted ales. EVO’s mission is to produce the finest local ales in the Mid Atlantic Region. With more than 8 different ales available, Evolution Craft has poured their hearts into creating a popular collection of tasty beers to pour into your glass.

Since April 2009, Tommy and John Knorr have been successful at bringing their passion to as many people as possible. Together with Brew Master Geoff DeBisschop and Chef John Scheckells, Tommy and John developed something fantastic, something that everyone will love. The brothers opened the boutique production brewery in Delaware and decided to stick with their new venture. Since 2009, EVO beer has spread rapidly. 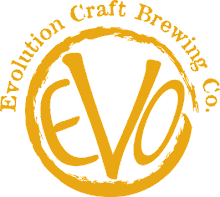 EVO beer is available on draft and by bottle throughout Maryland, Washington D.C., and Delaware. In the Ocean City area, you can have a glass of this locally produced beer at bars and restaurants like: Fager’s Island, SoBo’s, Specific Gravity, The Atlantic Hotel, Phillip’s, Marlin Moon Grille, Sunset Grille, and at The Shark on the Harbor.

Many of the restaurants and bars in the OC area love the idea of EVO because it is local. Local beer means less cost for transportation, less cost for importing, and more support for our nearby economy. By choosing to feature a local brewery, restaurants like The Shark on the Harbor use EVO beer as a way to “go green” and help reduce waste by buying locally.

Want to see the brewery? Drive about 45 minutes through DE to Delmar. The brewery is located at 501 N. Bi-State Boulevard and offers several tours and samplings. The tasting room is open Wednesday through Sunday, noon to 6 p.m.

Next time you’re out in Ocean City and can’t decide which beer to order, ask the bartender to pour you some of our local ale. They’ll know to give you an EVO beer!

This author has not added a biography. Meanwhile nicasio has contributed 465 posts. Click here to view them.