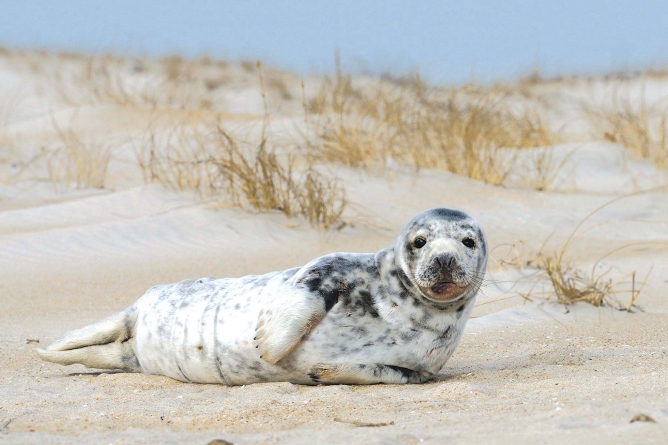 (Dec. 26, 2014) They may be cute and they may be cuddly but they are wild animals, are susceptible to a host of diseases, including rabies and herpes, will bite and can carry fines of up to $500 for “harassment,” which is basically any interaction that might change the animals’ behavior.

They’re seals and they’re back in Ocean City.

A young harbor seal was spotted on Dec. 7, the first seal of the season. Sandi Smith of the Maryland Coastal Bays Program said in a release the first “social haul out” in Ocean City was in 2008.

Smith said hauling out is a normal behavior of pinnipeds, otherwise known as seals, sea lions and walruses. The animals take a necessary break from foraging for mating, giving birth, escaping predators, social activity and rest – activities that are coupled with an inherent degree of agitation.

Approaching a seal to sate curiosity is fine, to a point. Keep 50 yards between the observer and the observed and the consequences will be few. More if there is dog involvement.

Seals are protected by the Marine Mammal Protection Act. The bill was signed into law in 1972 by Richard Nixon prohibiting the hunting, killing, capture or harassment of marine mammals. The law is enforced by the Fisheries service of the National Oceanic and Atmospheric Administration.

“We try to educate folks as much as possible,” Assistant Director, Northeast Division Logan Gregory said.

If that fails, enforcement becomes an option. Gregory said NOAA employs uniformed officers and special agents to handle that side of things. Here in Ocean City, there is one special agent, Steve Niemi, managing the area.

Niemi said summary settlements, what he is empowered to issue instead of a ticket, provide for a $500 penalty for feeding wild animals for a first offense. Harassment carries a $100 fine for a first offense and $500 for a second. More severe interaction – Niemi recalls animals being shot with guns and arrows – carry harsher penalties.

“We do our best work when people do what they are supposed to do,” he said.

Niemi said he has never issued a summary settlement with regard to seals.

Indeed, there are other, preferable options to sidling up to a hauled-out harbor seal and risking fines. If a seal is discovered on local shores, the Marine Animal Rescue Program, part of the National Aquarium in Baltimore, should be contacted at 1-800-628-9944.

An observer from the program will locate the seal and evaluate its condition: social, tired, hungry or injured, for example, and coordinate with Ocean City Animal Control to keep the animal safe.