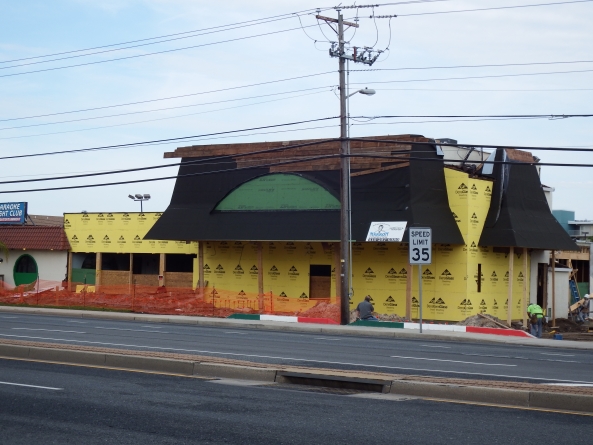 (May 30, 2014) Burritos and quesadillas will replace ravioli and lasagna at 33rd Street, but the new owner will not have alcohol beverage privileges at as many outdoor seats as he had hoped.

Guido’s Burritos owner Rocco Di Filippo asked the Board of License Commissioners on May 20 for those privileges for 138 seats outside the former Angelo’s Italian Cuisine, but they turned him down.

They did not want him selling or serving alcohol to patrons in an area on the east side just a few feet from Coastal Highway, but will permit alcoholic sales, service and consumption at 56 seats on the restaurant’s outside deck on its north side. They also prohibited the proposed outside bar on the east side and outside speakers.

Because the board only controls alcohol, Di Filippo may allow people to eat on the remaining seats of the east side.

Substantial construction has been taking places at the restaurant. The roof structure is being altered and improved. The interior has been gutted, more booth seating is being created and a service bar is being added.

There are no changes, however, to the Sandbar Lounge on the south side of the building.

The alcoholic beverage license for Angelo’s Italian Cuisine allowed entertainment of up to four pieces seven nights per week in the lounge plus three games, two pool tables and Karaoke. It also permitted an upstairs comedy club. Years ago, Gunning’s Comedy Club was in that space. And even earlier, it was an after-hours club.

Attorney Mark Cropper, on behalf of Di Filippo, told the board that the privilege for the comedy club could be eliminated, but Di Filippo would like to continue the remaining privileges, plus add outside speakers for background music.

He also wanted alcoholic sales, service and consumption on an elevated deck, with a 42-inch-tall railing, between the restaurant and the highway. A 5-foot-wide landscaped buffer would be between the sidewalk along Coastal Highway and the deck’s railing.

Cropper presented photographs of 20 restaurants with outside seating. Seven of those have alcoholic service outside.

Under questioning by Cropper, Di Filippo said outside seating is essential to the success of Guido’s Burritos.

Board member Charles Nichols said he was concerned about the public’s safety in the outdoor seating area and suggested getting rid of it and the bar.