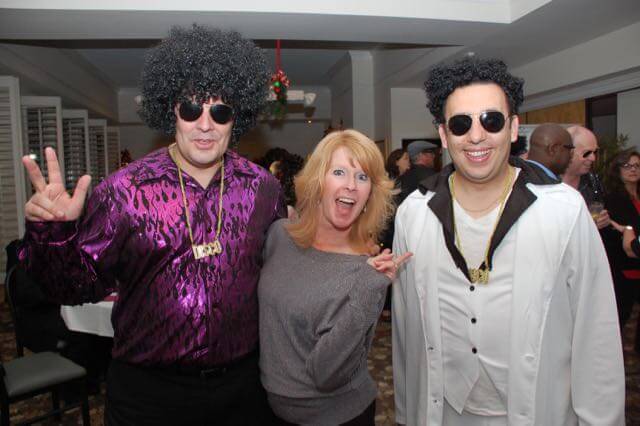 It cannot be argued that the Dunes Manor doesn’t know how to throw a party, or at least not argued convincingly after the Christmas Disco Ball. The Christmas Disco Ball was part of a tradition, although it was in no way traditional. This especially was true from the Happy Hour perspective as they were not taking payment for any of the awesome fare. As it turns out the hotel has an annual guest appreciation party around Christmas time. They also invite friends and employees to come and dress up after a particular theme. The theme, I’m told, changes from year to year. The awesomeness (I’m told) doesn’t. Which is impressive, even more impressive than some of the wonderful, wonderful wigs on display.

I entered the room a little apprehensively. It was a theme party, after all, and I wasn’t dressed appropriately (except that I sometimes feel as if my glasses are oversized). There was a good mixture of people who had gone all in and those who, well, hadn’t. There were also a couple people who occupied the middle ground choosing safer costumes. My uncle Michael once attended what he thought was a costume party but turned out to just be a cocktail party. Fortunately, he went as a gangster, so he was just the guy in the odd suit, rather than the maniac dressed like (for example) Bozo the Clown. It also helped that he left his plastic machine gun in the car. That story often informs my decision to go small with my own costumes. But I have to admit I was jealous of the people who dressed spectacularly.

That’s the thing about camp. It is almost impossible to overdo. I think it might be the reason parties like this are so fun, they give us a chance to wander into the outlandish, stay there, and get comfortable. It’s also as if there is an award for bravado that allows you to adopt a persona. Finally, as a professional bar reporter, I gotta assume the booze helped a little bit.

Party pros at the Dunes

The other thing that helped is that the folks at the Dunes Manor totally knew what they were doing. I guess it’s obvious to say but it also is worth mentioning. A lot of times, I get caught up in an experience and forget to look at the wheels that make it turn. Even though much of the staff were dressed as aliens from Planet 1970s Fabulous, they were still so totally on the ball. As I watched everything come together, the food and drinks came and went, the glasses were filled or removed and the buffet was fresh and hot (or cold, depending on which table you were at) throughout the evening, it was as if I was getting a course on how to throw a party.

Getting to watch professionals do their jobs professionally always is a pleasure, and the fact that the Dunes staff were both at the party and running it made the entire event even more amazing. Also the music helped. For the few days after the party as I talked with some of the other attendees, the planning and execution is what came through. I began to get the picture that it wasn’t just me who had noticed how effortless-seeming the entire event is. People would mention that the party is always a blast and that they make it whenever they’re available for the evening. That’s saying something.