On Wednesday, owner Bob Noll was waiting to hear back from the city on granting him a Certificate of Occupancy, which says the building is up to code and ready for opening.

Noll’s stepfather, Gus Bollas, and his first wife opened the restaurant in the George Washington Hotel on 10th Street and the Boardwalk more than 45 years ago. There were discussions the hotel may be demolished and General’s Kitchen was relocated to the Beachmark Hotel in the early 1980s.

Bollas ran General’s Kitchen until he died in April 2000 when his wife and Noll’s mother, Angela Bollas took over.

Last August, the property owner informed Noll his lease would not be renewed, which gave him about four months to find a new location.

Closing was never an option because Noll vowed to continue his stepfather’s and mother’s wishes to keep their restaurant open.

“Both made it clear Gus did not want his restaurant closed and my mom made it known she wants the place open for her kids,” Noll said. All of the staff at General’s Kitchen were considered Bollas’ kids right up until she passed away in December 2013.

Noll’s face lights up when he talks about the staff he employs, many of whom have been working at General’s Kitchen year-around for 25 years or longer.

“A lot of our staff is older and this is how they support their family and kids,” he said.

Noll said he looked at 18 to 20 places in the area including Burger King, Bahama Mamas, English’s Fish & Chips, Halls Restaurant, JR Ribs, 67th Street TownCenter and was even offered Francis Scott Key in West Ocean City, but moving out of Ocean City was not ideal. Noll wanted to be within 10 to 20 blocks of 74th Street and he “did it in eight.”

None of the places were a good fit for General’s Kitchen until he considered Galaxy 66’s property.

“It is already an established restaurant that had the necessary amenities required,” Noll said. “Grease traps, electrical, a walk-in fridge, bathrooms and the space were already here. Even the tables and chairs were here, which we wouldn’t have had enough of anyway if we moved them from 74th Street.”

Galaxy 66 can seat 150 people at any given time, which is a nice boost from the 84 seats at its previous location.

“There is always a line in the summer and we would get calls from numerous people saying they saw the long line, saw there was no parking and left,” Noll said. “Now we can get more people in with our quick turnover and additional seating.”

The 66th Street restaurant has an abundance of parking behind the building and, in a lot leased from the city, adjacent to the structure.

The interior of General’s Kitchen has the same look as Galaxy 66, but they have brought in some of their signature casual charm such as paper menus on the tables, their September 11 memorial wall and taking orders by hand and hanging them up in the kitchen.

The kitchen is where most renovations took place and was a main focus for Noll. They removed the old cook line and replaced it with brand new equipment costing more than $80,000. A stainless steel cap with a double layer shelf and heat lamps were added to make more room to put food, Noll said.

The bar area will remain even though General’s Kitchen does not serve alcohol. As an alternative, Noll plans on adding a juice appliance for smoothies and a cappuccino machine.

Because Noll was strained for time, he was unable to finish every renovation desired.

In the future look forward to the return of the familiar General’s Kitchen awning added above the entrance, a drop ceiling all the way across the restaurant to block out noise and carpets lining the floor.

Noll plans to expand the menu and offer more lunch options. A vinegar-based barbeque sandwich, wraps, chicken wings, mozzarella sticks and multiple types of lettuce for salads are a few of his ideas.

“We will try certain items out and see the response we have from the public, which will determine if we keep or change,” Noll said.

Gus Bollas’ philosophy was to never allow his patrons to leave his restaurant still hungry.

“The quality of the food we serve is what makes us stand out,” Noll said. “The friendly atmosphere of the staff is an added bonus. If you’re a frequent visitor, it’s more than likely you know all the waitress’ names.”

General’s Kitchen will be open five days, closed Tuesdays and Wednesdays, from 6:30 a.m. to 1:30 p.m. in April. Starting May 1, it will be closed only on Wednesdays until Memorial Day, when the restaurant will be open seven days a week.

“It’s a 45-year tradition in Ocean City that continues,” Noll said. “We’re looking forward to all our General’s Kitchen friends to be back.” 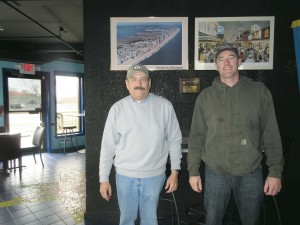 Law Adkins, pose for a picture in their new location on 67th Street

below the Skye Bar.