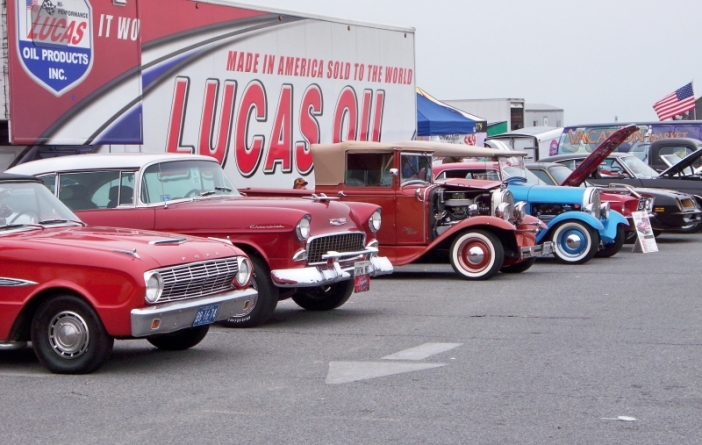 (May 16, 2014) More than 3,000 custom cars, hot rods, street machines, classics and other vehicles return to Ocean City this weekend for the 24th Annual Cruisin’ Ocean City.

Each year, the four-day event draws about 30,000 participants to its car shows, which started Thursday and continue through Sunday at the Roland E. Powell Convention Center on 40th Street and downtown at the inlet parking lot, said promoter Meredith Herbert.

“After the winter that we’ve had, I think people are excited to get their cars out and come down to the car show,” Herbert said, calling the inlet the show’s “epicenter for activities, with the classic Boardwalk on one side and the car show on the other.”

“’Counting Cars’ has been a pretty popular show among the car community this year, so we were fortunate to get Mike,” Herbert said.

He’ll be at the inlet Friday from 11 a.m. to 4 p.m. and at the convention center’s ballroom Saturday during the same hours to sign autographs, pose for photos and discuss “Counting Cars.”

Also appearing this year are stars from the movie “American Graffiti” Mackenzie Phillips and Paul Le Mat. They will be on hand for photos and autographs every day to help celebrate the movie’s 40th anniversary.

“American Graffiti is… a classic, hotrod movie,” Herbert said, and this will be “one of the few times that people have gotten to see Mackenzie and Paul together.”

There will be American Graffiti Tribute Cars inside the convention center ballroom Friday and Saturday, too, and the Friday appearance by the actors alongside the cars will make for “a unique photo opportunity,” Herbert said.

Another crowning piece of the annual Cruisin’ event is its the Boardwalk parades, which take place today and Saturday starting at 8 a.m. on the boards at 27th Street, making their way south to the inlet.

“The participants enjoy cruising down the Boardwalk and spectators enjoy watching,” Herbert said. “There are thousands of people that line the Boardwalk… early in the morning to watch the parade.”

Usually, between 600 and 700 cars take to the boards for the procession, though Saturday’s parade will be capped around 200 due to high Boardwalk foot traffic, she said.

Other highlights of the 24th Cruisin’ event in Ocean City include the Express Auctioneer’s Collector Car Auction, which will feature around 100 classic cars for sale, including a rare 1949 Lincoln Cosmopolitan Convertible, Herbert said.

Auction previews start at 9 a.m. today, with a live auction at 11 a.m. Bidders can register onsite before the event, or visit www.occollector-cars.com or call 443-807-8883 to participate.

In addition to the highlight events, top national companies will showcase their products at the manufacturers midway at the inlet lot throughout the Cruisin’ event.

At the convention center, visitors can find Kwik-Lift and many other vendors selling car products alongside arts, crafts, jewelry, T-shirts and other specialty items.

In all there will be around 50 vendors inside and outside both venues, Herbert said.

Cruisin’ will feature be live music, including Cruisin’ Gold at Wild Bill’s Bar at 403 S. Baltimore Ave., and games with prizes such as free bingo and trivia inside the convention center ballroom.

Tickets to Cruisin’ Ocean City cost $10 each day and are good at both locations. Children under 14 get in free with an adult.

There will be a Grand Finale Awards ceremony starting at 3 p.m. Sunday, where winners will take home the Mayor’s Award, Town of Ocean City Choice Award and other honors from business owners and sponsors.