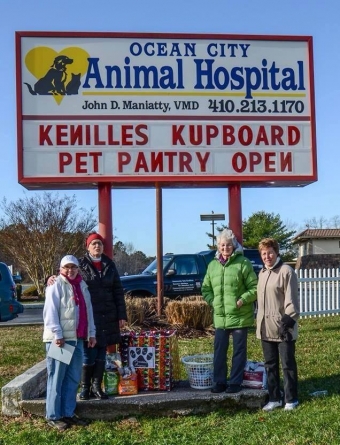 (Jan. 3, 2014) Following her controversial ouster from the organization earlier this year, the former director of the Worcester County Humane Society is taking up a new venture to help needy families with animals.

Kenille Davies, who formally severed ties with WCHS on Nov. 30, has hit the ground running with a new group known as “Kenille’s Kupboard,” which gives food and other pet supplies to those who may otherwise have difficulty providing for their animals.

“A lot of people can’t afford to care for the pets they have,” Davies said. “That was the reason to start [the WCHS] 37 years ago and we still want to help with this new project.”

Since September, the group has been collecting donated supplies through word-of-mouth and via drop-offs at various locations around the resort area. Distribution to those in need has been much the same way.

“We’re literally working out of the trunk of a car right now,” said Carolyn Miller, a long-time friend of Davies and a former WCHS employee. “But even on Christmas Eve, we were able to make contact with five families who we helped.”

Miller has been working to find “people who are on the edge of being able to keep their pets.”

“If we can help them out now, then we can keep the pets out of the shelter to begin with,” she said.

The group is storing some of its goods at the Ocean City Animal Hospital on Route 50 and is hoping to put a dedicated storage shed on the property where it can pool all of its resources. Regardless, Davies has already travelled extensively to pick up and deliver donations.

“The animals can’t help who owns them and where they live,” said Davies, who on Tuesday had recently returned from a trip to Baltimore.

“I filled the trunk up with food from someone who supports us up there,” she said.

During her long tenure with the WCHS, Davies frequently offered free food and veterinary assistance to those in need who brought their pets to the shelter.

“When I was at the shelter, we never tried to embarrass people about needing help with their animals,” she said.

However, Davies’ liberal distribution of aid was allegedly one of several points of friction between her and a group of WCHS board members. Accusations regarding her loose management style over the informally organized shelter came to a head earlier this year, when Davies and several board members were threatened with legal action by another group of board members after it came to light that the WCHS had spent endowment funds on operating expenses.

A suit over financial mismanagement was dropped on the condition that Davies resign her position.

Nevertheless, Miller said the new group is working to obtain 501c(3) tax status of its own, which will allow donors to make tax-deductible monetary contributions.

“The next level will probably be medical care and clinics,” Miller said. “Beyond that, who knows? We just want to be able to help people with whatever they need.”

An inaugural meet-and-greet event is tentatively scheduled for the weekend of Jan. 18-19, with more details to come soon, Miller said.