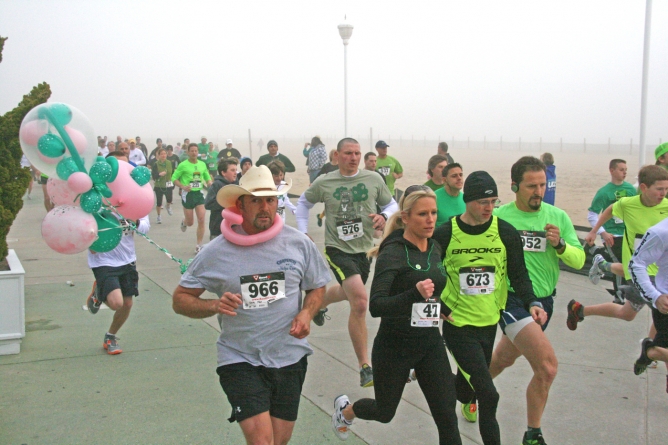 (March 13, 2015) The fifth annual St. Patty’s Day 5K will be the largest since the race’s inception with close to 1,100 runners set to make their way down the Boardwalk on Saturday morning.

Sponsored by OC Tri-Running, the event is a precursor to the St. Patrick’s Day parade scheduled to begin at noon along Coastal Highway from 57th to 45th streets.

“People come to Ocean City for the parade, which is one of the largest in the state,” OC Tri-Running President Chris Klebe said. “Families and friends gather together to have a nice run and enjoy Shenanigan’s [restaurant] before going to the parade.”

More than 1,100 runners from 18 states have already pre-registered online. This year, women have taken over the race as significantly more females have signed up than men. For organizers to better prepare for Saturday’s race, online registration has closed, although the first 50 people to sign up at packet pickup tonight, Friday, from 5:30-8 p.m. at Shenanigan’s Irish Pub, on the Boardwalk at Fourth Street, can take part for $40, Klebe said.

The race begins at 9 a.m. in front of Shenanigan’s. Runners will go south on the Boardwalk to the inlet, race around the pier and under the tram station, make a turn to head north to 16th Street then back south to the Fourth Street finish line.

Awards will be presented to the first and second fastest male and female, in addition to first, second and third place finishers in seven age groups for both genders at approximately 10 a.m.

Race fees include a tech style long sleeve shirt, race finishers ribbon and one Guinness drink ticket that can be redeemed at Shenanigan’s after the event.

Last year, 1,020 signed up, but 910 people participated on race day. Unless there is bad weather, the race draws a large amount of people and has grown almost every year, Klebe said.

Proceeds from the race will benefit local charities. About $1,500 was raised last year. This year, a portion of the funds will go to Diakonia, a residence in West Ocean City which provides emergency and transitional housing, food services, counseling and assistance to its guests, and Worcester Youth and Family Counseling Services based in Berlin, which provides a broad spectrum of services helping people of all ages with the goal of inspiring individuals to lead healthy, fulfilling lives. It offers counseling services, education, outreach, support, professional education, training and advocacy for children.

At Shenanigan’s, there will be an after-race party with bag pipes and music by Patrick McAllorum at 11 a.m.

“It’s important to enjoy the day and have fun,” Klebe said. “The whole atmosphere of being at Shenanigan’s on race day captures the moment of St. Patty’s.”