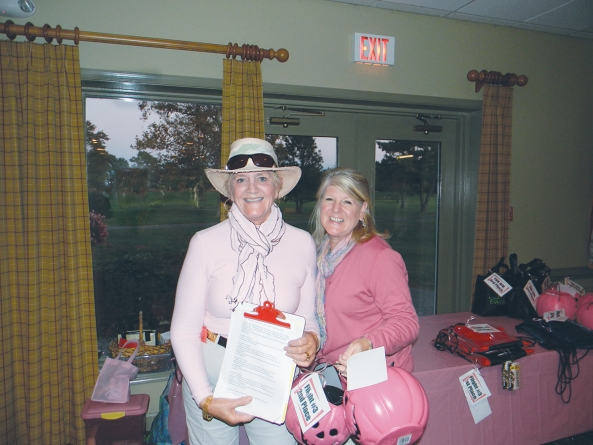 An entry fee of $100, or $400 for a team of four, raises money for the American Cancer Society’s breast cancer research and programs and includes lunch, 18 holes of golf with a cart, dinner, an official tournament gift bag and chances to win prizes, auctions and raffles.

In its 18th year, the golf classic was an early event in what became Ocean City’s Pink Ribbon Classic Series, an assortment of local events designed to raise breast cancer awareness and garner money for the ACS.

The Eastern Shore Executive Women’s Golf Association (EWGA) chapter also began 18 years ago and wanted to do something to give back, Dofflemyer explained.

“We thought it would be a really nice way to give back to the community and have an opportunity to make the community aware of our local chapter,” she said.

“It was the beginning of the Pink Ribbon Classic,” Dofflemyer said. “We added the tennis tournament the next year. Then we added the walk and run. It just kept growing.”

Today, the series includes nearly a dozen fundraising events from the tournaments to scrapbooking gatherings, bar crawls and the Making Strides walk and run on the Boardwalk tomorrow, Oct. 18.

Over the years, the events have raised more than $1 million for breast cancer research and development. Last year alone, the golf classic raised about $18,200, thanks to 24 teams of four women each, Dofflemyer said.

She already has 19 teams registered for the 2014 event, many of which local businesses are sponsoring, she said.

Golfers are urged to register in advance, but can sign up the morning of the tournament at the Ocean City Golf Club in Berlin, starting at 10:30 a.m. Many golfers chose to wear pink for the event, from ribbons and hats to decked out golf carts, Dofflemyer said.

After practicing putting or visiting flags purchased and placed around the green in honor or memory of loved ones who have battled with breast cancer, lunch catered by Sunset Grille and Galaxy 66 will be served at 11:30 a.m. before a noon shotgun start.

The Pink Ribbon Classic is a scramble format tournament with three divisions based on handicap as well as one fun, non-competing division. There will be prizes such as rounds of golf and golf equipment for the longest drive, the closest to pin contest and division winners.

After the tournament, a full dinner catered by Touch of Italy will be served. There will also be silent auctions and a Chinese auction.

“It’s just going to be a fabulous day for $100,” Dofflemyer said. “There are so many tournaments now that are way above that price.”