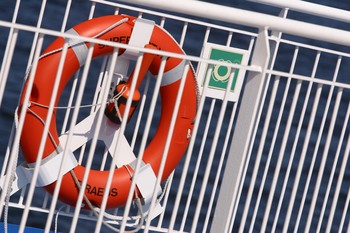 (Oct. 10, 2014) A father ambles down the sandy shore while his son splashes and plays in the surf on a clear cloudless Ocean City weekend. Dad may not be paying complete attention until he hears the scream: “Help!”

The father knows that voice. Looking up from the sand mound he’d been kicking, he sees the raised arms of his boy flailing in the water.

Maybe his first reaction is to look around to see if there are any lifeguards on duty. This time of year, the Ocean City Beach Patrol has limited staff making the rounds. More often than not, the father will do what the  OCBP reported he did last Saturday: Jump in the water to save his son.

“Swimming rescues often lead to multiple deaths. Quite often it’s the parent,” Beach Patrol Lt. Ward Kovacs said. “This is why we so often say people shouldn’t be swimming when there are no guards on duty. Call 911.”

Luckily, there were guards close.

“We had guards on 55th Street to initiate the rescue. The guard on duty was one of our assistant crew chiefs whose coverage area was centered on 68th Street,” Kovacs said.

The incident occurred close to 71st Street just before 1 p.m.

“The crew chief, Andrew Padley, was on his home turf,” Kovacs said. The fire department was hot on Padley’s heels and helped effect the rescue.

Holding true to Kovacs’ prediction, the father turned out worse for wear in this scenario. Town Spokesperson Jessica Waters said the pair were evaluated and declined transportation to Atlantic General Hospital for further examination.

Kovacs said the father was taken to the hospital but was unaware of his status. Although the man needed help exiting the water, he was conscious and alert.