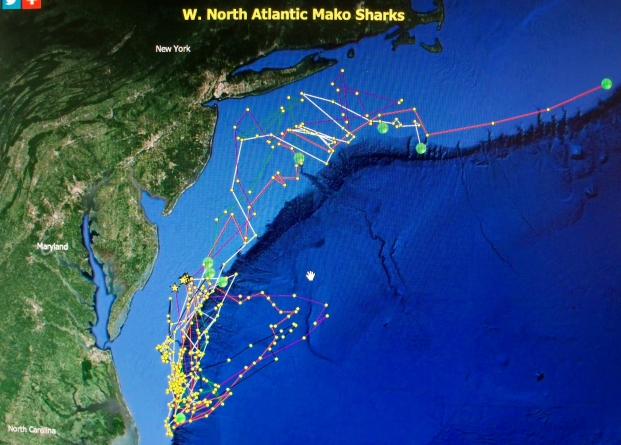 (July 11, 2014) Not much is known about the movement, travel and migration patterns of shortfin mako sharks, which is why, in late May, eight of them were fitted with SPOT (Smart Position and Temperature) tags off the coast of Ocean City.

Since then, they have been transmitting daily and their path as well as current location can be found online at www.nova.edu/ocean/ghri/tracking.

Two-time Emmy award winner, videographer George Schellenger, was also on board to document the trip.

“The mission was very successful with eight tags deployed over six days we were there. All sharks swam away strongly after release and all eight have been transmitting their locations multiple times a day since release,” Shivji said. “For us, eight makos was better than I had expected because makos are not as common as blue sharks. It’s a hit or miss situation…I’m very pleased. I’m especially pleased that they’re reporting every day.”

After the makos–which ranged in size from 5-6.5 feet–were caught, they were carefully lifted into the boat, measured and a tag was bolted to each of their dorsal fins. They were then returned to the ocean. The process took an average of five minutes per mako.

“It’s kind of like a pit crew. Everyone has a job,” said Sampson, captain of the Fish Finder, who has been studying and researching sharks for a number of years. He is also the director of the Ocean City Shark Tournament. “There’s a lot to do in a short amount of time.”

The satellite tags were programmed to transmit daily in May and June. From July on, they were set to transmit every other day in order to preserve the battery life. Each tag runs on one AA battery. The cost is $1,700 per tag, which doesn’t include satellite and data processing time. That costs about $100 per month, depending on how often the tag breaks the surface of the water and data is transmitted.

Individuals, companies or organizations can sponsor a tag and name the shark it is attached to.

After Shivji and Wetherbee left Ocean City, two Guy Harvey Research Institute research associates came to town to tag additional makos, May 24-27. Two days they had bad weather and didn’t go offshore. The other two days they saw some blue sharks, but no makos, Shivji said.

This is the second year they have tagged makos off the coast of Ocean City. Last year, five were tagged. They all hung around the area for a bit, before heading north and east, Shivji said.

Two were caught by commercial long-liners, one near Nova Scotia and the other around Newfoundland. Two others stopped transmitting after about eight months.

“I-NSU” was tagged May 31, 2013 and it continues to transmit. It has traveled approximately 11,840 miles. Shivji said it first went north, then east, like the others, then it “made a B-line” south, swimming toward Venezuela.

“That’s a long way to swim. It’s just a juvenile,” Shivji said. When they tagged the male shark it measured about 5 feet.

The mako then turned around, swimming north. It is currently located off the coast of Nova Scotia.

Tracking information will be provided to management and conservation agencies in the United States. They are working together to help prevent further decline of the species.

Shortfin mako shark is the most popular species of shark to eat. According to the Guy Harvey Outpost Web site, they are caught worldwide for their meat and their fins are valued in the international fin trade.

“Mako sharks are high value sharks. Their meat is valuable and when people catch them they often keep them,” Shivji said. “Their meat is tasty, shortfin especially, and their fins are valuable in the global market.”

Fisheries landings data indicate populations are declining due to overfishing. The species is now listed as “vulnerable” to extinction on the International Union for Conservation of Nature (IUCN) “Red List.”

NOAA Southeast Fisheries Science Center staff work with the International Commission for the Conservation of Atlantic Tunas (ICCAT) to assess the status of shortfin makos in the Atlantic. The most recent assessment was completed in 2012. According to the latest stock assessment, Atlantic shortfin mako stocks do not appear to be overfished.

Shivji said the real status of makos is controversial.

“One key thing, we don’t know much about movement patterns. We need to know if they migrate or if the stock is low,” Shivji said.

Location as of July 8: www.nova.edu/ocean/ghri/tracking

JiffyLube 1 – male, tagged May 19, traveled about 723 miles, off coast of Maryland

JiffyLube 2 – female, tagged May 19, traveled about 970 miles, off coast of Long Island, NY

SOSF1 – female, tagged May 20, traveled about 1,106 miles, off coast of Massachusetts

SOSF2 – male, tagged May 20, traveled about 698 miles, off coast of North Carolina

SOSF4– male, tagged May 21, traveled about 569 miles, off coast of Maryland

JiffyLube 3 – male, tagged May 22, traveled about 918 miles, off coast of New Jersey