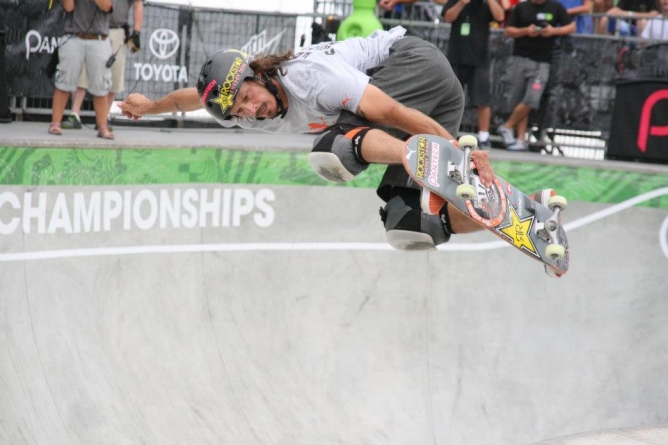 (June 14, 2013) The countdown to Dew Tour action is on as workers this week began constructing a vertical ramp, skateboard bowl and a BMX park, along with the rest of the venue that will contain the “Dew Tour Experience” booths, activities and concert stage.

The Dew Tour Beach Championships, scheduled June 20-23, will unfold on the beach, adjacent to the Boardwalk, just north of the pier in downtown Ocean City.

“The Dew Tour brings such an exciting energy to Ocean City. The Beach Championships are a unique celebration of action sports and what better place to host such a lively event then Ocean City’s beach and Boardwalk,” said Jessica Waters, communications manager for the Town of Ocean City. “It’s four days of sports, music and fun for our residents and visitors.

This is the third year the Dew Tour will host competitions in the resort.

In 2011, the Pantech Open set a Dew Tour attendance record by drawing an estimated 73,000 fans during its four-day run, July 21-24, in Ocean City — its first beachfront venue.

That record broke last year as approximately 93,000 spectators came out to the beach in downtown Ocean City for the Dew Tour Pantech Beach Championships, Aug. 16-19.

“It’s always great to come back to Ocean City where we enjoy strong support from the city, local officials and entire community,” said Dew Tour General Manager Kenny Mitchell. “We’ve held very successful Dew Tour events here for the past two years, and are looking forward to another amazing Beach Championships event in 2013.”

Ocean City offers an “amazing beach setting” and the energy of the Boardwalk creates a perfect synergy with the event, he said.

“Ocean City is an ideal East Coast beach destination and [a place] where we can celebrate action sports with the thousands of fans who attend the Beach Championships each year,” he said.

New to the lineup is Skate and BMX “Battle at the Beach” Street Sessions.

“These contests will feature a small group of top street skaters and BMX riders in a high-energy event that brings street to the beach,” Mitchell said.

The Tour will also present “Recognize: Art” to celebrate and highlight artwork from action sports athletes and influencers.

“We feel it’s important to inspire our fans and show them action sports is more than amazing tricks, it’s about culture and a way of life,” Mitchell said.

Admission is free for all competitions and concerts, although a limited number of premium passes are available online at http://dewtour.com. Premium Pass tickets guarantee fans a seat for that day’s competitions as well as Dew Tour swag and exclusive souvenirs. They cost $35 for Thursday’s events and $80 each for Friday, Saturday and Sunday activities.

“The Dew Tour Beach Championships will feature the biggest names in skateboarding and BMX competing in our Vert, Skate Bowl and BMX Park and Flatland events, in addition (to) the ‘Battle at the Beach’ Skate and BMX Street Sessions,” Mitchell said.

“Fans can also enjoy the Dew Tour Experience, where our partner brands will host a wide range of activities, games, athlete meet and greet sessions and more. To round out the weekend, visitors can also take in the ‘Recognize: Art’ event and two nights of great live music,” he said.

On Friday, June 21, fans will hear New Politics and Krewella, while Saturday night’s “Battle at the Beach” Skate Session will be accompanied by a set from DJ Stimulus, followed by a performance from Talib Kweli, Mitchell said.

On April 3, Alli Sports, a division of the NBC Sports Group, announced the 2013 Dew Tour schedule, with Ocean City again stop No. 1.

For the 2013 season, The Dew Tour will feature the “Beach – City – Mountain” format. The tour will return to the urban action sports heritage of San Francisco for the second event of the year, Oct. 10-13, and wrap up at Breckenridge Ski Resort in Breckenridge, Colo., Dec. 12-15.

The 2013 Dew Tour will be shown on NBC, NBC Sports Network and Dew Tour Live on Dew Tour.com.

“Hosting the Dew Tour provides an enormous amount of free publicity through the T.V. broadcasts,” said Susan Jones, executive director of the Ocean City Hotel-Motel-Restaurant Association. “Not only is our town highlighted during the actual event, but there are countless mentions and replaying of the event throughout the year.”

“Dew Tour has brought in a whole new group of visitors from areas that may have never even heard of Ocean City. We are fortunate they chose our city,” she said.

According to the Demoflush statistics, which uses wastewater flows to estimate the city’s population, approximately 303,787 people were in town during Dew Tour weekend last year.

“There is definitely a positive impact on the town economy thanks to the Dew Tour. Last year’s event was the largest attended event in the Dew Tour history with over 93,000 people attending,” Waters said.

“Not only is it broadcast live on NBC and NBC Sports, but it is streamed live on dewtour.com. They have a huge fan following and people from all over the world who follow action sports are able to see all of the amazing things Ocean City has to offer; beginning with our beautiful beach and Boardwalk,” she said,

BMX Battle at the Beach

Skate Battle at the Beach