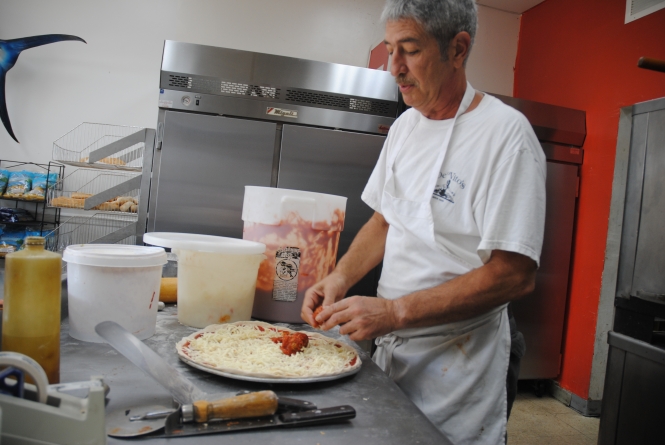 That all changed in 1977, when the family made the shift into the deli business.

“We knew the restaurant business, but we didn’t really know the deli business,” he said. “It’s been a learning process since Day 1. You’re always learning something new.”

The DeVito’s relocated just a few years later in May of 1981 to uptown Ocean City.

As DeVito explains it, the move happened by chance when the family was looking to buy a restaurant in Fenwick Island, Del., and lost the deal.

“I just happened to see a ‘for sale’ sign in this window,” he said from his 143rd Street shop. “The price was right and we decided to make a move to Ocean City.”

DeVito’s kept the integrity of the original building in the Resort Plaza rather than changing the sub shop to mimic their D.C. business, but some things remained the same. The Gaslight special, for example, is named for DeVito’s Washington neighbor, the Gas Light Company.

The deli dishes up a host of subs with an Italian twist, such as the Roman Prince with proscuitto, sopressata, capocolla and provolone, but it’s bestseller is the DeVito Special — a cold cut sandwich packed with genoa salami, capocollo, mortadella and provolone cheese.

All of the sandwiches come on DeVito’s Italian bread, which he bakes in-house based on a family recipe.

“My dad made pizza dough for years and I extrapolated on it for the bread,” DeVito said.

Other popular dishes include the Godfather sub topped with roast beef, swiss cheese, thousand island dressing, cole slaw and tomatoes. DeVito’s also offers salads and pizzas as well as sides such as potato salad and DeVito even bakes cookies at Christmastime.

The second generation to run the sub shop, DeVito followed in the footsteps of his father, Sam.

The deli had undergone some changes over the years, including this year’s update to the restaurant’s menu board that features a photo of the original D.C. shop in the background. But most of the changes have been in Ocean City itself, DeVito said.

“We’ve been here watching the north end of town grow and how it’s changed,” he said.

Business still boomed in the early days, though, as more residents call the northern end of town home and the next-closest stop was Rehoboth Beach, Del.

As the resort changed, DeVito’s began shutting down a few weeks during the year and now runs an April-December operation, although that’s plenty to keep DeVito and his six summer employees busy, he said.

The owner never imagined he’d run the family business for more than 30 years, but said he’s happy with his work.

“I never, ever in my wildest dreams thought I’d do it, but the more I do it, the more I enjoy it,” DeVito said. “I love what I do every day.”