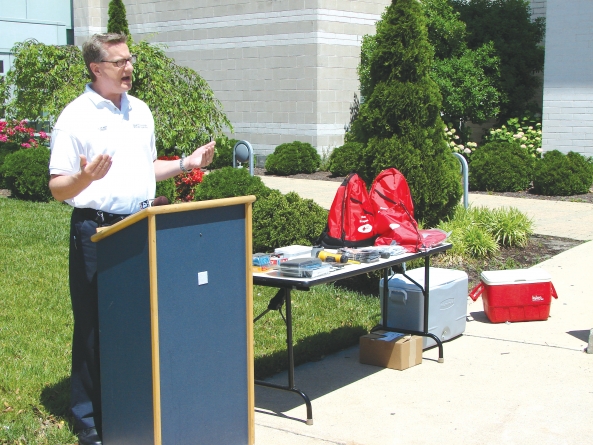 (June 7, 2013) With the 2013 hurricane season officially beginning this week, local authorities are again reminding coastal residents to be on guard for yet another bad storm.

“When we’re dealing with major threats, it’s important that we coordinate our efforts … hurricanes don’t respect political boundaries,” said Clay Stamp, Talbot County Director of Emergency Services and head of the Delmarva Emergency Task Force. For years, Stamp managed the emergency services arm of Ocean City’s government before leaving to take a post with the state.

Given the relative isolation of the Eastern Shore and its dependence on a relatively small number of bridges and access points, Stamp stressed the need for political and public cooperation in moving relief into any storm-affected areas, and taking possible evacuees out. In 2011, Hurricane Irene forced just such a scenario, with the resort evacuating most of its summertime labor force in anticipation of the storm.

“It doesn’t matter how many storms they’re predicting, because it only takes one big one for Ocean City to have a very bad day,” said resort Emergency Services Director Joe Theobald.

Theobald encouraged resort residents to be prepared for inclement weather and the possibility that they may be isolated for some time if services and transportation are cut during a major storm.

“It’s not that difficult to go out and buy a case of water, which is enough for one person for three days,” Theobald said. “Buy a box of Powerbars. It might not be the best meal, but you’ll live.”

John Culp, head of the Lower Shore Chapter of the American Red Cross, said his organization has secured two disaster trailers packed with cots, blankets and all the supplied necessary to set up a refugee camp in the event of a weather disaster. One trailer was purchased through a grant from the Purdue Foundation on the condition that the second be funded though private donors.

“Thanks to a very generous donation from the Town of Ocean City, along with nine other donors, we were able to purchase this trailer,” Culp said. “It lives here in Ocean City, but is available to go wherever the need is.”

With 91 percent of customers saying they were satisfied with the company’s power restoration efforts after Hurricane Sandy, Delmarva Power Vice President John Allen said the company is still investing in projects to make the power grid more resilient.

But the company is also keenly aware that it may have to take the opposite approach, as it did during Sandy, and preemptively cut power in order to prevent hazardous conditions and damage to infrastructure.

“In the event that service interruptions can’t be prevented, or have to be made, we want to make sure our customers are prepared,” Allen said.