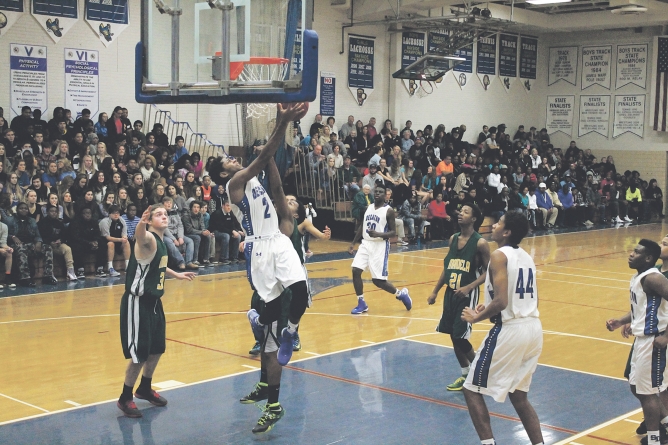 (Dec. 12, 2014) The Stephen Decatur boys’ basketball team dominated the Mardela Warriors from the beginning of Tuesday night’s game in Berlin. The Seahawks won in their gym packed with fans, 71-48.

“We’ve preached in practice that we have to get a better start and I think the kids came out focused and got off to a pretty good start,” Decatur Coach Byron “BJ” Johnson said. “We controlled the game from the very beginning. I just think that we need to come out a little better on defense. That’s our bread and butter this year. If we’re going to win games it’s going to be on the defensive end of the floor.”

Decatur led 12-4 at the end of the first quarter. By halftime, the home team had pulled ahead 29-14.

The Seahawks’ momentum carried them through the third quarter where they outscored the Warriors 24-14.

“We always preach defense and I thought defensively we did OK. We still need a lot of work on offense, but anytime you win with a young team you have to be patient and we feel that with each game we’re going to get better,” Johnson said. “To beat some of the top echelon teams, I think we need to execute a little better on offense, but we’ll take every ‘W’ we can get.”

Junior captain Keyon Eley led his team with 24 points and five rebounds. As a Decatur captain, Eley said, “I was helping out my players and letting them know where they had to go, and helping out on defense. I don’t really care about who does the scoring as long as my team works together.”

“It’s a team effort,” he added. “I think we did great. Our defense was on point, we got a lot of fast-break points and we advanced the ball a lot. It was a pretty good game.”

Decatur will host the Easton Warriors on Monday and the Pocomoke Warriors on Tuesday. Both games are scheduled to start at 5:30 p.m.