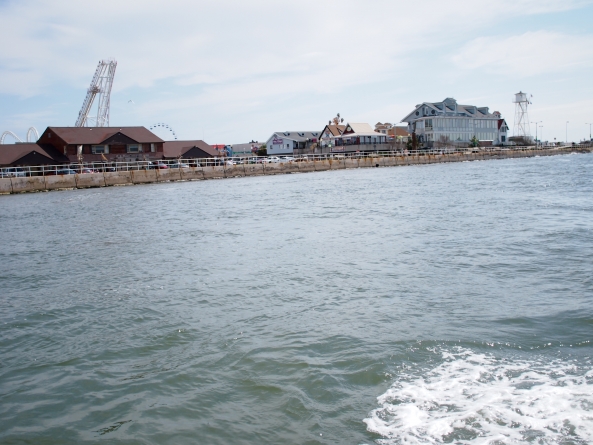 (April 24, 2015) The dredges will keep dredging, the beaches will still be replenished and the inlet will continue to fill up with sand that damages boats, the commercial and recreational fishing industries and Ocean City’s reputation as a maritime hotspot.

In short, the Ocean City Inlet is already a navigational mess because of shoaling and will only get worse unless some major fix is employed.

That was the consensus of the 30 or so commercial and recreational fishermen and government officials who met Tuesday at the Marlin Club in West Ocean City to discuss the situation.

The first-of-its-kind meeting was organized by Delegate Mary Beth Carozza (R-38C) and, in addition to local fishing interests and officials, drew representatives from Rep. Andy Harris’ office, the Department of Natural Resources and the Army Corps of Engineers.

That there is a problem was not in dispute and its effects are starting to be felt: commercial fishermen are uprooting their operations here in favor of New Jersey, where they won’t have to wait for favorable conditions to dock their boats without damaging them.

The commercial fishermen, in an industry worth millions to the area, are also acting as a bellwether for the recreational fishing industry, including tournaments like the White Marlin Open, which by itself is worth millions.

It is problem well described by Merrill Campbell, the manager of the Ocean City dock for Southern Connection seafood.

Campbell said in just that one 24-hour period the dock handled $92,000 in seafood, “I’m not saying they didn’t make it. Everyone made it,” but the danger was present and the volume of seafood entering through the harbor is enormous.

“Ever since [Superstorm] Sandy, I hit every night going in and out. We’re supposed to call the Coast Guard when it happens, but I’d have to do it every night, which isn’t going to happen,” another waterman said.

The watermen agree the bay is filling in.

“They started pulling hard dredges in 1962. When you exit the channel north or south, you’re aground. There’s a helicopter out there policing our catch. Instead of paying for the helicopter, I say we should buy a dredge,” angler Jack Kaeufer said.

“Sandbars exist now that were never there before. The sandbar in front of Hooper’s didn’t exist. I’ve been stopped dead in the middle of the channel. The bay is filling in,” Cropper said.

“I’m not against beach replenishment,” waterman George Topping said, “but that sand is filling in the bay. You’re taking our shoals — our barriers are going on the beach. It’s going to shut down this harbor for commercial fishermen and recreational fishermen.”

The ongoing issues, damage and inconvenience of using Ocean City’s harbor had brought at least one waterman to the breaking point.

“Joe Letts, who had six boats in the harbor, came into my office red-faced mad and informed me of the shoaling issue,” Worcester County Commissioner Bud Church said, “and said he had to move his boats to New Jersey. Joe told me in two years he’s spent $4 million per boat in fuel costs. That’s a multimillion-dollar loss with one gentleman leaving the area. We can’t afford those kinds of losses in these times.”

In the broadest possible sense, the issue is with the sand filling in the inlet and surrounding waterways boat operators use to enter and exit the harbor. How that sand comes to be there is, according to the Army Corps of Engineers, a matter for study.

“We’re clear on the sense of urgency with our dredging situation,” Carozza said, “We’ve got to ensure we have the same understanding of the problem and focus on solutions.”

Bob Blama, a project manager with the corps, earned high praise from the watermen for his efforts to maintain the inlet and channels and his responsiveness to their upkeep needs. Blama, a self-described “mud sucker,” said he wasn’t the person to study the issue, since it was his job to go in and get rid of accumulated sediment.

“A resource study from 1998 said sand from Delaware jetties shoots out on flood tides and goes back out. About 190,000 cubic yards per year end up on Assateague Island. There are a plethora of theories but we don’t know why,” Blama said.

The results of that study, paired with the conversations had during the meeting might be enough to get another study done to figure out the cause, and hopefully eventually solve the problem.

“What I’m hearing is we don’t need to start from scratch,” Carozza said.

Locally, the portion of the process appears pretty simple. Blama said officials would need to send letters of intent regarding the three-step process that might eventually lead to a solution.

The inlet is currently authorized to be dredged to a depth of 10 feet, with a two-foot overdraft. If Blama can secure what he called “advanced maintenance funds,” which may need a letter of intent from locals, it’s possible to bump that number up to a 12-foot depth, plus two feet of overdraft.

If Blama is successful in reopening a project concerning the inlet “currently stuck in the design phase” that would definitely need a letter of intent, the depth could be increased to between 14 and 16 feet with another two feet in overdraft. This step has a cost-sharing component of 90 percent federal and 10 percent local.

Blama said he believes the local portion can come through in-kind donations, such as constructing a disposal site for the estimated 90,000 cubic yards of material the dredging would produce.

The long-term solution would come as a regional project of the Army Corps of Engineers carrying a 65-35 cost sharing provision, and would require federal intervention, Blama explained.

“We’re working with speculation until the studies are complete,” Bill Reddish, attending on behalf of Congressman Harris, said.