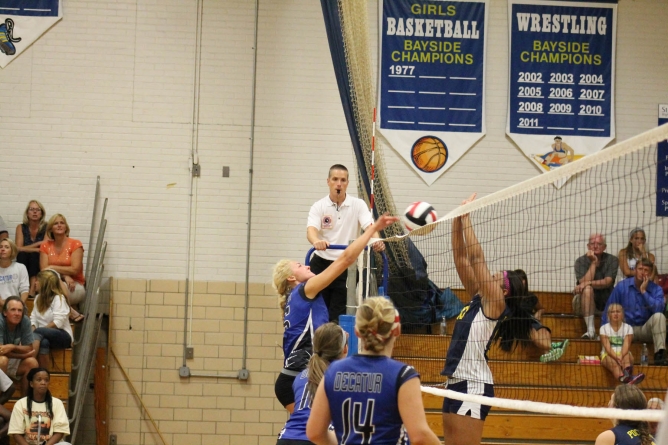 (Sept. 12, 2014) The Stephen Decatur volleyball team didn’t face much competition in its first match of the season as the Lady Seahawks won easily, 25-10, 25-12 and 25-11, over the Pocomoke Warriors on their home court Monday.

“I felt like we looked a lot better than we did at Play Day (Aug. 23). We were more organized and I felt like they knew where they were going (on the court) better,” said Decatur Coach Sarah Purnell. “I still wish we could communicate more and have better passes, but they’re getting there…They’re passing better than what we’ve seen at practices, but they can still improve. There’s always room for improvement.”

The Seahawks went up against stiffer competition the following day. After a long bus ride to Ridgely to battle the North Caroline Bulldogs, the Decatur squad came out strong in the first game, but lost, 25-12.

“Our first game, while we lost, we played hard and with intensity,” Purnell said. “Our girls were pumped, communicating and getting lots of touches.”

“Game 2 was completely different. Not the same intensity,” Purnell said.

The girls picked up their level of play in the third game, but the Bulldogs prevailed, 25-16.

“Game 3 started slow, but they started to pick it up toward the end,” Purnell said. “North Caroline was good, but we were hanging in there. We just let it get away from us too early and it was hard to catch up.”