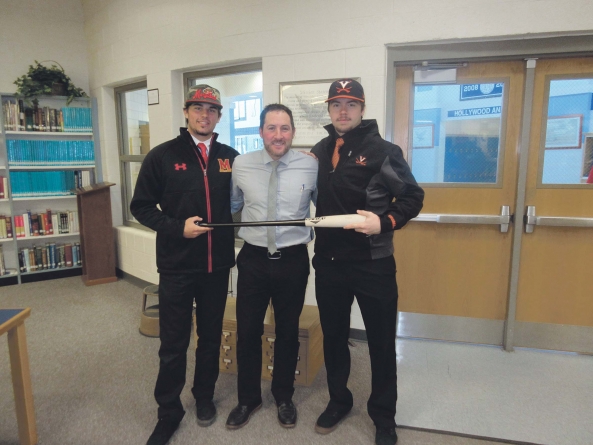 (Dec. 12, 2014) Stephen Decatur star pitcher Grant Donahue was beaming during a signing on Nov. 20, where he announced the decision to play baseball for the NCAA Division I University of Virginia. Donahue, 17, will pitch and play third base in his fourth and final season as a Decatur Seahawk. In addition to high school, he has played club ball with the Evoshield Canes the past few years.

The sparkle in Donahue’s eyes when he talks about playing baseball is apparent, which he has been doing since he was old enough to hold a ball.

“Grant and Justin [Meekins] have been playing together since they were 7 years old. It has been nice to watch them grow up playing baseball,” said Donahue’s mother, Denise.

Donahue committed to the University of Virginia in the summer of his sophomore year with a partial athletic scholarship. He had to think for a moment about his signing, which happened a couple of years ago.

“The moment I shook hands was … unbelievable,” he said. “The first time I went to the field and stepped on the mound it felt like a fit. Like I was supposed to play here.”

Donahue said he enjoyed the entire baseball facility from the weight room to the field when visiting University of Virginia. He admitted he fell in love with the Charlottesville area and the beautiful campus. After meeting the players, he said he could see himself fitting into “the family” and he enjoyed getting to know them.

His college goals include winning a national championship, deciding what he will major in and working hard to finish college. He is passionate about baseball and would love to be playing or involved with the sport as a career.

It is not always fun and games when training. Donahue travels to Denton three times a week with his pitching coach where they mostly work on conditioning.

Donahue has reached his final season of baseball for Stephen Decatur High School and said he enjoyed the past three years on the team. His goals for the final season are to win Bayside, regional and state championships. Defeating rival Parkside twice is an important part of his season, he said.

“The boys are part of a great program and nucleus. They won a Bayside title and lost in the regional finals last year,” Decatur Coach Rich Ferro said. “They’ve been very successful by working extremely hard to get where they are today. That is why [Meekins and Donahue] are sitting in front of you and going on to play at Division I schools who are powerhouses in their conferences and on the national level.”

Meekins officially announced he will play for University of Maryland the same day.

Donahue has a list of accolades including being a starter on Decatur’s baseball team since his freshman year, Bayside South’s Pitcher of the Year and a selection on team Maryland’s roster in 2014. He will be attending an awards banquet at Camden Yards this winter. In addition, Donahue has made the preseason all-state team the past two years.

“In college, Grant will get better because he has a great coach. Coach [Karl] Kuhn will make him stronger and help command his pitches,” Ferro said. 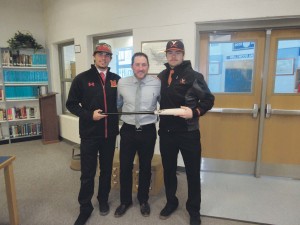 Stephen Decatur baseball Coach Rich Ferro joins seniors
Justin Meekins, left, and Grant Donahue, for a photo
Nov. 20 at the Berlin school, as the boys announce they
will be playing Division I baseball at University of Maryland
and University of Virginia, respectively.