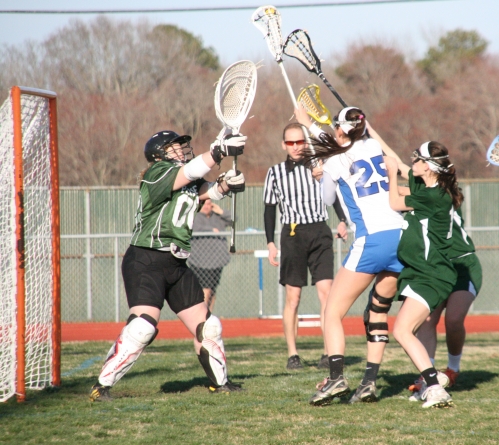 The first to fall at the hands of the Lady Seahawks was the James M. Bennett Clippers.

The teams went head-to-head on Monday in Salisbury. The visiting Seahawks led 12-0 and the halftime break and came home with an 18-0 shutout.

“We started off slow, but we out-hustled them and got all the ground balls,” said Decatur Coach Bob Musitano. “Our defense was awesome. They wouldn’t let them get the ball in. We held [Bennett] to three shots.”

“Scoring was spread out nicely,” Musitano said. “They seem to be playing well as a group. It’s not a one-person team and I really like that.”

Decatur junior Jillian Petito played in goal the first half and stopped two Bennett shots. Freshman Sara Mitrecic took over in the second half and recorded one save.

The following day, the Parkside Rams came to Berlin for competition. They were also unsuccessful against Decatur, losing 14-5 to the home team.

Four minutes into the game, VanKirk gave Decatur a 1-0 lead. Junior Blair Yesko scored four unanswered goals in a seven-minute time period to boost the Seahawks’ advantage to 5-0. Fowler notched Decatur’s sixth goal with 4:03 remaining in the first half.

Yesko tallied her fifth goal of the game at the 1:50 mark.

Parkside scored with 1:42 on the clock and trailed by six at the break.

Decatur outscored its opponent 7-4 in the second half.

“Parkside played excellent defense. All of our goals were from behind. We stuck with the plays we use from behind (the goal),” Musitano said. “We just out-ran them, I thought. It was a big game for us. We needed to win it to set the tone for us for the Bayside (Conference).”

Yesko, who was feeling ill the day before the game, but “OK” on Tuesday, according to Musitano, finished with six goals.

“That was impressive,” the coach said.

VanKirk had two goals and two assists. Remmell tallied one goal and one assist, and Musitano said she was working hard and contributing “all over the field.”

Petito “was great” in the goal, Musitano said. She stopped 11 Rams’ shots.

“She really stepped up,” he said.

Freshman goalie Rachel Florek stepped in for the last five minutes of the match. She made one save and allowed two goals.

Decatur is set to travel to Cambridge to play the Vikings today, Friday, at 6 p.m.