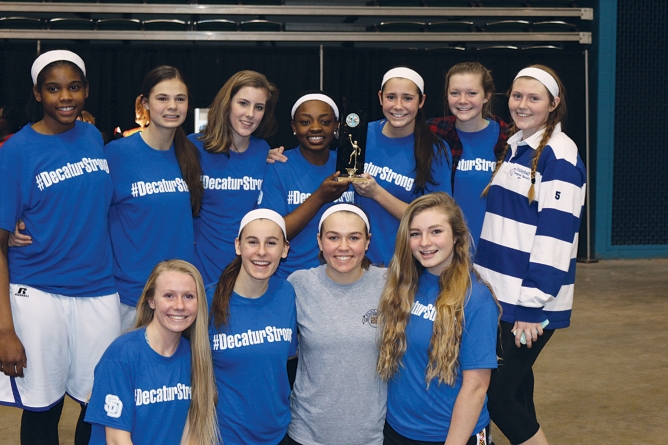 (Feb. 27, 2015) The last time the Stephen Decatur girls’ basketball team played for, and won, a conference championship was in 1977.

Last year’s team came close to competing in the Bayside Conference championship match, but the Lady Seahawks lost out to Mardela in representing the south division.

This year, the Seahawks made it to the big game at the Wicomico Youth & Civic Center in Salisbury.

When they stepped on the court Wednesday, senior Payton VanKirk said she and her teammates felt a mix of nervousness and excitement as Decatur fans cheered them on.

“We’ve been working toward this, especially the seniors,” she said.

“It was a big adjustment, playing in a different venue and in a bigger arena,” said Decatur Coach Amy Fenzel-Mergott. “We had to get into our comfort zone.”

The Seahawks were never really challenged by Bayside North representative, the Queen Anne’s Lions. Decatur won the game 51-36 to capture the conference title.

“Everything lined up for us. It was so surreal,” VanKirk said.

VanKirk scored the first three baskets to put Decatur on top 6-0. At the end of the first quarter, the Seahawks led 12-7. The Berlin squad went into the halftime break on top 28-19. After three quarters, Decatur held a 36-27 advantage.

The Lions cut the Seahawks’ lead to six points (36-30) in the fourth quarter, but that was as close as they would get.

“It got nerve-racking at times, but we knew we could do it,” VanKirk said. “I’m proud of the team and how everyone came together. We’re looking forward to playoffs and states.”

“I feel like we did [control the game],” Fenzel-Mergott said. “It’s nice to see their hard work pay off.”

Decatur needed to win its final two regular season games to represent the Bayside South in the conference championship. The Seahawks did so without any problems.

The Decatur girls’ soccer team also won a Bayside title this fall, the first time since 2003 when the squad was coached by Fenzel-Mergott. The VanKirk sisters, Petito and Beck were members of this year’s champion girls’ soccer team. They will all play lacrosse this spring and are eyeing a third conference title for the year.

“It’s exciting and we know it’s in our reach,” P. VanKirk said. “It would be awesome to accomplish it together.”

The girls’ basketball team finished the regular season with a 19-1 record (22-1 overall). The Seahawks received the No. 1 seed in Section I of the 3A South Region tournament bracket.

“We’re excited. That means we have home games until we lose,” Fenzel-Mergott said. “It’s a big advantage to have the support of the school and the community.”

Decatur was awarded a first-round bye. The Seahawks will host the winner of today’s, Friday’s game (weather permitting) between No. 4, the James M. Bennett Clippers and No. 5 Northeast Eagles of Anne Arundel, on Monday. Game time had not been announced as of Thursday morning.

“We’re peaking at the perfect time. Our offense is in sync and we’re playing good defense,” Fenzel-Mergott said. “Mentally, these girls are so focused on what they want. They are working so hard. It’s been a great ride and we’re going to make it last as long as we can.”

The 1977 team advanced to the state semifinals and Fenzel-Mergott said this year’s squad “hopes to follow in their footsteps.”