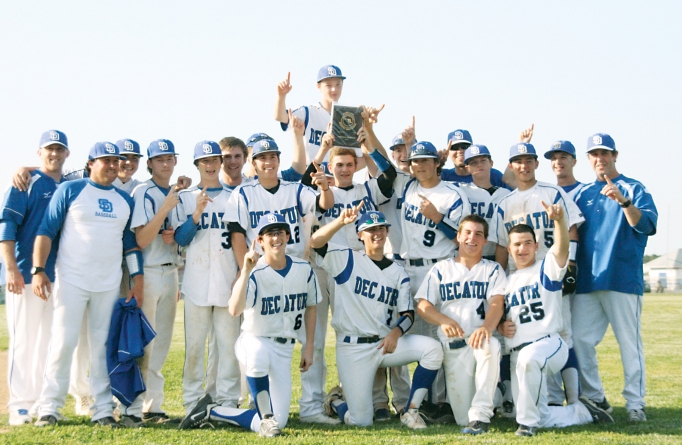 (May 24, 2013) The Stephen Decatur baseball team led 4-3 going into the bottom of the seventh inning, when the LaPlata Warriors scored two runs for the come-form-behind 5-4 victory in the 3A state semifinals on Tuesday at Joe Cannon Stadium in Hanover, Md.

Junior Jacob Hickman drove in sophomore Justin Meekins to give Decatur a 1-0 lead in the first inning. Hickman earned another RBI in the third, to boost the Seahawks’ lead to two. Senior Dallas Harrington’s sacrifice fly increased Decatur’s advantage to three runs.

Harrington’s RBI single in the fifth put Decatur on top 4-0, but LaPlata knocked in three runs in the bottom of the inning to cut the Seahawks’ lead to one.

With two outs in the bottom of the seventh, the Warriors scored, tying the game at 4-4 on wild pitch by Decatur sophomore Grant Donahue.

LaPlata capitalized on a Decatur miscue as the runner on third notched the game-winning run.

“For six and two-thirds innings, we were leading and going to the state finals and we just didn’t execute,” said Decatur Coach Rich Ferro.

Decatur advanced to the state semifinals after defeating the Reservoir Gators 3-1 last Friday in the 3A East Regional finals.

Junior Chase Coursey singled to bring in the first run of the regional title game in Berlin in the bottom of the first. The Gators evened it at 1-all in the fourth.

In the bottom of the fourth, freshman Zach Adams doubled to score Harrington and give Decatur the go-ahead run.

A Meekins double in the fifth put the Seahawks on top 3-1. The home team held the lead to captured the program’s first regional championship title.

“We’ve gotten timely hits these past couple games and we’ve had a lot of luck,” Ferro said last Friday. “We had some quality at bats, we got runs we needed, our pitchers have thrown strikes and we played defense behind them…We’re down to the final four teams in the state in the 3A and we’re just really fortunate we got the chance to compete.”

“My arm felt great. It always makes me feel comfortable knowing I have 100 percent defense behind me,” Donahue said after winning the regional title. “This feeling is amazing. The entire team is excited.”

Closer Sean Colgan, a sophomore, took the mound for the last two innings. He struck out three—two in the bottom of the seventh—and allowed two hits.

“I knew it was a big situation, but bottom line, I had to get the job done. I was a little nervous, but I tried to keep it in the back of my mind and I just kept throwing like it was a normal game,” Colgan said. “So many emotions rushed into my head (after striking out the final batter). We’ve come so far this season and it’s just a great win for everyone.”

Decatur finished the season with a 16-6 record. The Seahawks were seeded third in the 3A East Region. They shut out the No. 6 Mt. Hebron Vikings 1-0 in nine innings last Monday in Berlin, and two days later the Seahawks, again competing on their field, edged out the No. 10 River Hill Hawks 5-4 to earn a spot in the May 17, regional finals.

“It was a great season. We’re really proud of them,” Ferro said. “We have some young guys, but they’re polished. They were really competing against older, more experienced players, but they never backed down from anything. It was definitely a good ride.”

The future looks bright for the program, with a number major contributors returning next season.

“We’re hoping they want to get back to [the state tournament] and be on the winning end,” Ferro said.