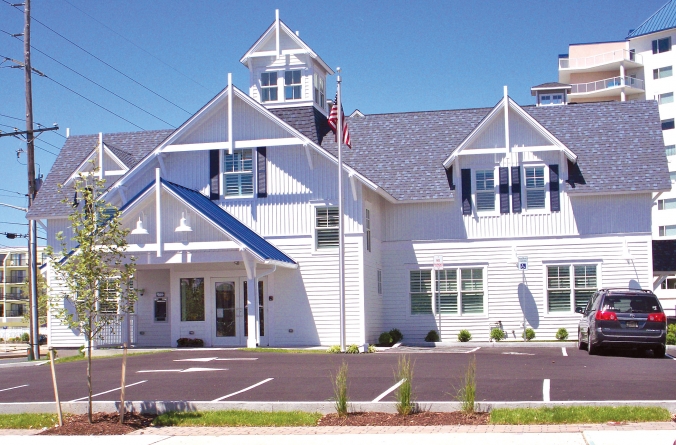 (June 7, 2013) The Bank of Ocean City opened in a new building on 59th Street on May 7, much to the excitement of residents who did their banking at that branch. A grand-opening celebration and ribbon-cutting ceremony was held last Thursday.

“All of our customers are glad we’re back open. Everybody loves the new building,” said Jason Parker, branch manager and assistant vice president. “It’s nice to be part of a new building and have everything up to date. We’re glad to be back here.”

The bank original opened on 59th Street on May 5, 1973. It closed on Sept. 5, 2012 and the 40-year-old building was demolished. The lot was cleared and construction of a new two-story building began in mid-September.

“We were closed September to May for the least amount of inconvenience for our customers,” Parker said. “We wanted to be back open in time for the summer season.”

The original building did not have an upstairs. It also had one drive-thru window, while the new building has two. Parking is more convenient and there is easier access into the lot from Coastal Highway.

All six of the Bank of Ocean City branches have different designs. This particular building was designed by Jeff Schoellkopf and resembles an old lifesaving station.

Reid Tingle, the bank’s executive vice president, had seen pictures of the old stations in the Snow Hill courthouse, Parker said. He liked their designs and suggested a branch building with those characteristics, Parker said.

“We were going for the Ocean City look and feel,” Parker said.

The 59th Street branch offers the same products and services as it did in the previous building. During June, new customers who transfer their personal checking accounts to the bank will receive their first order of checks at no charge.

The first Bank of Ocean City opened on Dorchester Street in downtown Ocean City in 1916. The West Ocean City branch, which is the main office, opened in 1976. A branch opened on 122nd Street in 1990, followed by an Ocean Pines location in 1997 and a Berlin branch in 2007.