(May 22, 2015) If there’s one thing that city officials, business owners, residents, and show promoters can agree on after last weekend, it’s this – the idiots, unfortunately, appear to have become the majority. Or at least that’s how it feels.

What can be done about it, however, is still up in the air.

While Cruisin’ OC itself – the show for pre-1977 hot rods that takes place at the inlet and convention center parking lots – was another rousing success last week, the environment outside the show left a lot to be desired.

In fact, many show participants themselves reported being a bit uncomfortable driving through the Wild West of Coastal Highway, where all the cowboys ride large diesel trucks and the tumbleweeds are Keystone Light cans.

“What we have found, in reality, is that there are a great number of people who look at this like a NASCAR event and come down just to ‘run with the pack,’ and they don’t have the buy-in that actual show participants have,” said Cruisin’ OC organizer Bob Rothermel.

“The problem is that our event takes a hit when the knuckleheads come to town,” Rothermel said. “We didn’t ask them to come here. Whether the car show is here or not, this is the place they want to be, regardless of our actual event.”

Statistics from the Ocean City Police Department indicate that enforcement was on par, or slightly less, than last year.

Citizen calls were up to 509 during the Thursday-through-Sunday span, versus 422 in the same span for Cruisin’ 2014. Officer-generated responses were down, from 1,716 over four days last year to 1,582 this year.

OCPD Public Information Officer Lindsay Richard said that the department’s response was heavy, although not to the level of some other events.

“With any big weekend, especially a motor vehicle event, we’re going to be all hands on deck,” Richard said. “It wasn’t on the level of college beach week, or the VW event, but we planned for significant numbers.”

Rothermel’s show itself only registers 3,300 cars. He employs 40 staff members for traffic management and security.

“We lease the inlet lot from the city and manage that lot. We lease the convention center, and

manage that,” Rothermel said. “I understand the frustration, but the problems are completely external to our event. There’s bad behavior that goes on outside M&T Stadium, but you don’t blame the Ravens for it. I feel like our situation is analogous.”

The growth outside of the event itself has been notable. Although Rothermel’s show is capped at 1976 model year cars, a number of piggyback events throughout the town host other vehicles.

At least one rally for late-model Mustangs was held on a private lot in town, another for Novas, and another for diesel pickup trucks.

“Are we the ones that kickstarted a reason to be in town? Yes,” Rothermel said. “But there are at least three other unsanctioned events being held, and their feet are not being held to the fire in the same way.”

While appreciating the influx of cash, most business owners agreed – it was the peripheral attendees, not the Cruisin’ participants themselves, that ratcheted up the tension.

“We were busy, I’ll say that,” said Brandon Hemp, General Manager of Fish Tales. “But we had to put up with a lot. Vandalism inside the restaurant, and out on the street in front of us.”

Hemp said he and his staff frequently had to ask diesel pickups to stop drag racing and blowing smoke on Herring Way, which runs in front of the restaurant and marina. Trucks also congregated in Fish Tales’ parking lot along the highway, drinking beer out of coolers.

“It was more or less just asking people to respect our business, and we found that not everyone was,” Hemp said. “Some choice words were said to us when we tried to address the situation.”

None of the issues, Hemp noted, were with groups that had a car registered for Cruisin’ OC itself, identifiable by a show entry sticker.

“To me, a lot of these people are not ‘real,’ registered cruisers. The registered people are here to have a good, responsible time and spend money. The others, less so,” Hemp said.

Even with the issues, business owners generally agreed that the weekend was still worth the headache.

“We provide a good time. That’s what we do here in this town. It’s not like we manufacture anything, except for beer,” said Danny Robinson, owner of Backshore Brewing, Hammerheads Bar and Grill, and Pickles Pub.

“You have to clean up after your guests, it’s inevitable,” Robinson said. “I don’t mind it. I take a lot of pride in the town and the beach, and I don’t like seeing some of the bad elements, but it’s a fact of life for us economically.”

Still, Robinson said, he felt the weekend was “hijacked” by outsiders.

“The diesel trucks, I’ve noticed. They’re scary. I don’t know what the answer is there. We have find a way to spread the message that, when you get out of line and ruin it for everyone, we’re

going to come down on you.”

What most leaders fear is the creation of an event monoculture – that is, bringing in a certain group of customers by allowing them to drive away other customers, as it seems automotive events often do.

This was less of an issue in the past, when the shoulder season in Ocean City was far less popular.

“Very few people were actually here the first weekend in May 25 years ago [when Cruisin’ started],” noted Mayor Rick Meehan. “The first year, there were 200 cars but people thought they were everywhere.”

“I think now, we really need to look at what we do moving forward, because things have changed,” Meehan said. “Things have changed in the last 25 years, we’ve built a lot of new hotels and condos and there are a lot of people coming to town already in early May.”

The question, then, is now that automotive events have made the shoulder season popular, if that popularity for hangers-on and rabble-rousers creating a negative margin of returns.

“It was definitely a full weekend for the hotels, but the behavior was not so great,” said Ocean City Hotel-Motel-Restaurant Association Executive Director Susan Jones. “I’m not sure what you do about it. We’re kind of at a crossroads.”

As Robinson noted, it would be unreasonable to expect that growth in visitorship – whether from auto enthusiasts or otherwise – would not cause an uptick in questionable activities.

“One in a hundred people is going to be an idiot, regardless of who they are,” Robinson said. “You get more people, you get more trouble. It’s easy to take a look at that and say ‘this group is horrible,’ but that’s the case with everybody.” 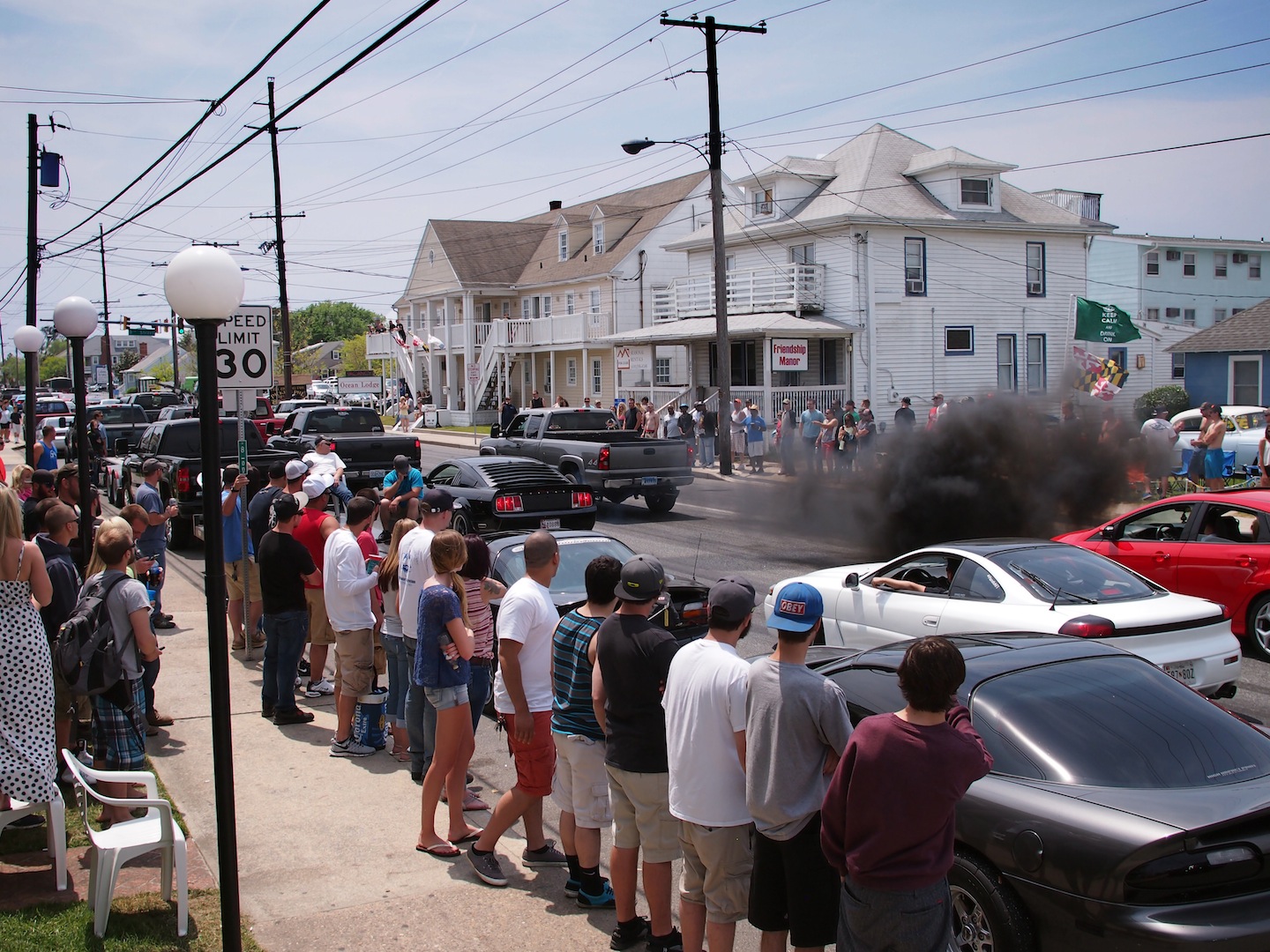