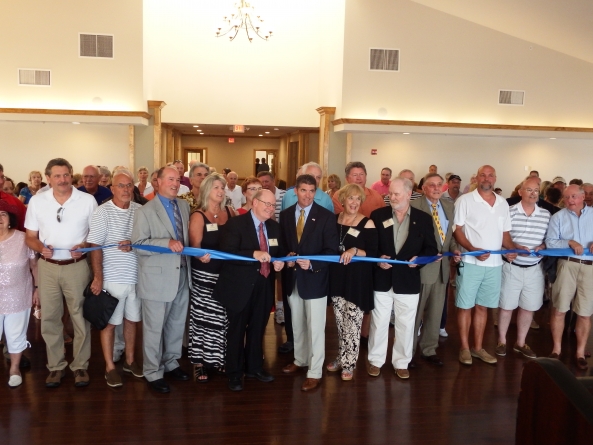 General Manager Bob Thompson told those gathered on the second floor that the facility had been “nine months in the making” and the outdoor Tiki Bar was still a work in progress. Although some small items remain to be done, the first wedding was held May 17 as he had said it would and the Yacht Club had opened Memorial Day weekend, as he had said he would. He thanked the project team of Carol Terry, Carol Ludwig, Bill Rakow and Ted Moroney, who contributed countless hours to make the new Yacht Club a reality.

“What a change from the old Yacht Club, isn’t it,” OPA Vice President Sharyn O’Hare said before the ribbon cutting as she recounted the opening of the first Yacht Club 39 years ago. That opening featured a play by the Ocean Pines Players and a dinner.

Sunday’s events included an open house at the Yacht Club Marina, a jazz brunch with a Bloody Mary bar and live jazz and  lunch on the deck with more live music. The ribbon cutting and dedication featured hors d’oeuvres, live Reggae music, a few speeches and congratulations all around for a job well done.

OPA President Tom Terry told guests how the new facility came to be.

Various groups of people had wanted their favorite facility fixed first and various studies were done. Because of the need to “get out of the continuous loop of reports and studies, Bob [Thompson] created the Facilities Planning Group,” Terry said.

That group ranked the community’s facilities, created a campus management plan and “did a final review to determine once and for all what we were going to do,” Terry said.

In what Terry called “an absolute miracle” in 2012, the OPA “absolutely did what we planned to do.” It got recommendations about building a new Yacht Club or rehabilitating the existing Yacht Club.

Ideas were gathered during town hall-type meeting and tours were given at the facility so people could see how deteriorated it was.

In Jun e 2012, the board of directors voted in an unusual unanimous vote to have a referendum to ask property owners if they thought  constructing a new building was a good idea.

“Many just knew it would not be approved,” Terry said, but more than 60 percent of the property owners voted and their votes were overwhelmingly in favor of a new Yacht Club. Then, he said, it fell to the general manager, the OPA team and the board of directors to move it forward.

Last fall, ground was broken for the new facility and Thompson said it would be open for Memorial Day weekend.

“The Yacht Club team was poised downstairs “ ready to start work in the kitchen on Friday, May 23. It had been announced that the new Yacht Club would be open for business at 4 p.m. that day.

“Three hours before we were to open, we finally got the go-ahead [from the county],” Terry said.

When Terry asked the crowd if they had tasted the food in the new Yacht Club, he was met with applause.

He then thanked two men “who have the highest level of commitment” to Ocean Pines. Ted Moroney was active in the planning group and continued to provide his knowledge of construction throughout the work to build the new facility.

“He tracked every single dollar spent on this project,” Terry said.

Terry then thanked Thompson, who, he said, was driven and dedicated in his commitment. He oversaw the entire project and showed “excellent leadership and top level guidance,” Terry said. When he thanked Thompson for his effort “on behalf of all of us,” he was met with thunderous applause from the appreciative crowd.