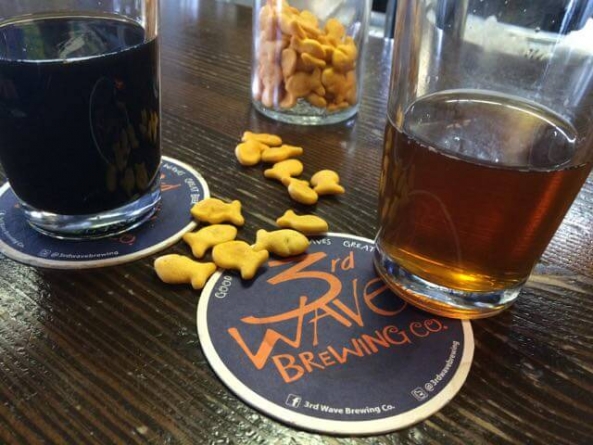 Over the coming week’s we, along with our friends at the Maryland Department of Tourism and the Brewer’s Association of Maryland, will be reminding some of you and hipping others of you about the combined flavor experience that craft beer provides access to. There’s a middle ground between being an insufferable beer snob and a person who recognizes that beer has an elevating quality without being a jerk about it.
We’re working to walk that line and will be inviting you to do the same along the way. When you’re out and about, consider sharing photos of which beers you are drinking with what meals and why you chose them. Tag us if you like, or just share it with your friends. The point is, though, think about why you like some beers with some foods. The more you do, the more you’ll get out of it…

Ocean City Brewing is always up to fun stuff. It’s been a fruity season all around as if that’s a great way to fight back spring. And it is.

Fun in the Snow

There were plenty of snowy beer photos showing off beer cooling in the snow, and most of the breweries were open. I heard someone complaining at the YMCA that the snow had closed a bunch of different chain restaurants. Eavesdropping as old white guys complain is my primary forms of entertainment, but it got me thinking. I guess when you don’t work at a brewery, it is hard to justify opening. Most of our area breweries were open and serving beer for at least a few hours as the storm bore down.
I had the pleasure of swinging by 3rd Wave Brewery where I got to try some of their new releases…

Fighting the good fight against cabin fever at @3rd Wave with a jalapeño-blueberry and a blackberry Belgian.

Posted by ShoreCraftBeer.com on Saturday, January 23, 2016

Snow’s over in Milton, elsewhere

Dogfish Head’s Milton facility, which is vaguely isolated, did have to close for a bit because it was a dangerous place to get to, same with Backshore, but both were raring to go once the sun returned.

Back to work after a messy weekend! Sunrise this morning in the brewhouse…. pic.twitter.com/C0hTNlE2tC — Dogfish Head Brewery (@dogfishbeer) January 25, 2016

The sun is out again and we are open today! Stop up to the boards and see us today from noon to 5.