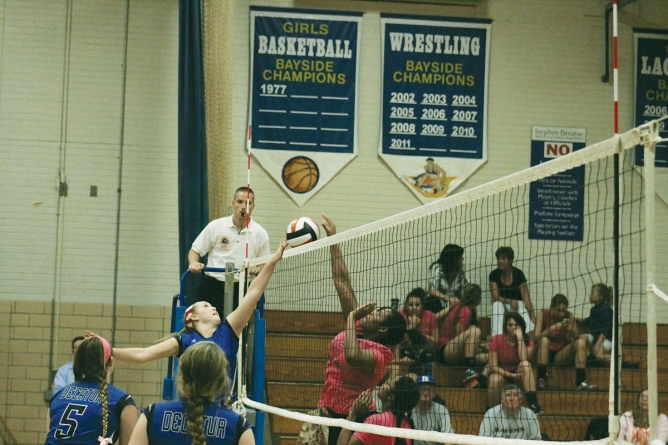 (Oct. 24, 2014) The Stephen Decatur volleyball team’s seven seniors were honored before the start of Tuesday night’s match against the Snow Hill Eagles.

Both squads wore pink in honor of Breast Cancer Awareness Month and to “Spike Out Cancer.”

Decatur was solid in the first game, winning 25-7.

The Lady Seahawks didn’t perform as well in the second game, but the home team managed to pull out a 25-21 victory.

Decatur held a comfortable lead in the third game, but Snow Hill began to chip away at it.

Ahead 22-18, the Seahawks tallied the final three points for the win.

“I thought the first game they came out strong, playing our ball, making great plays and passes and hits. I think we got too comfortable, and then game two— I’m not sure what that was,” said Decatur Coach Sarah Purnell. “They weren’t communicating [and] they seemed a little off. Game three they were able to sort of play more of our ball, but they still seemed maybe too comfortable and not ready for Snow Hill’s scrappiness.”

The draw for regional tournament bracket positions will take place Monday. Decatur will compete in Section I of the 3A South classification. Post-season action will begin either Thursday, Oct. 30 or Friday, Oct. 31.

“We had a few really good games back-to-back. I think typically when we play a higher-level team we tend to play a little bit better,” Purnell said. “As long as they can communicate and play our game we should be OK.”