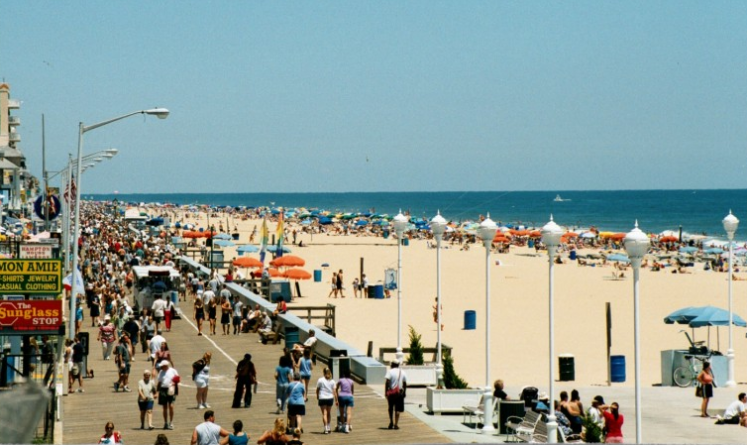 (Jan. 30, 2015) Boardwalk merchants could need to be a little more judicious with their spread of merchandise as the Ocean City Planning and Zoning Commission considers a revamp of retail display regulations.

The commission last week fielded a number of Boardwalk-related code revisions, which were recommended by the Boardwalk Development Committee, a sub-group of the Ocean City Development Corporation.

Among the proposed changes would be a revision to the calculation used for outdoor display areas on the boards north of Third Street, where setback areas between buildings and the boards are used to show merchandise.

Currently, properties with a full 32-foot setback (the current Boardwalk zoning standard) may set up a display area of up to 12 feet from their storefront, not to exceed 30 percent of the total area of the setback. For properties with less than 32 feet of setback, they may have an area up to eight feet from the storefront.

Additionally, the current code stipulates that if stores provide 10 percent of their display as functional amenities – such as seating, plantings, etc. – then they may use any portion of their setback (not just that adjacent to their storefront) up to 20 percent of the entire pad area, with up to half of the displays located within 10 feet of the boards.

Use of this clause, according to city Zoning Administrator R. Blaine Smith, has caused stores to crowd the boards with more displays, and, correspondingly, more amenities in order to meet the percentage.

“It’s subjective, of course, but the feeling is that is has created a lot of clutter,” Smith said. “What the BDC is proposing is that we don’t do the 20 percent for amenities, and do a 30 percent entitlement for everything up to 10 feet.”

In other words, the clause requiring amenities in order to display beyond eight or 12 feet will be done away with.

Additionally, the BDC is recommending additional leniency on display height, formerly capped at five feet. Exceptions are proposed for sunglass racks, which are typically manufactured at six feet, as well as “any other items deemed appropriate by the BDC.”

This clause was aimed at several specific items that owners wish to display, such as surfboards or wind socks that require more than five feet of clearance to fly.

A formal public hearing on the code change will be announced soon.