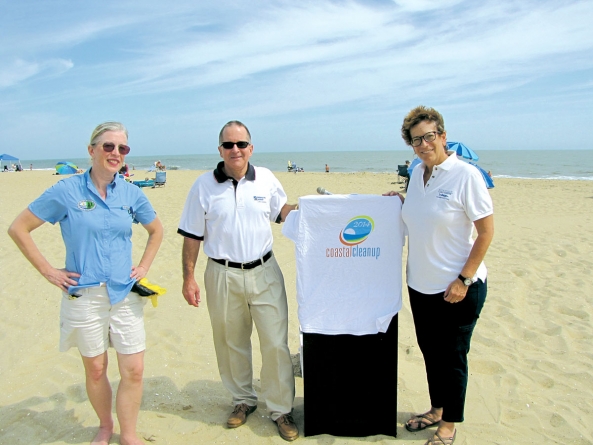 Delmarva Power with local partners will host the 28th annual event to remove trash from beaches, rivers and bays in Maryland, Delaware and New Jersey. Volunteers can still sign up to help with the cleanups taking place in Ocean City, Assateague National Seashore and Nassawango Creek Preserve, in Snow Hill, Saturday morning.

“Unfortunately, some people who visit our region’s beaches and rivers over the summer leave behind a lot of trash,” Delmarva Power spokesman Matt Likovich said during the Coastal Cleanup kickoff news conference last Thursday. “Add that to the debris that washes ashore and you have the potential for serious pollution.”

The annual cleanup event kicked off earlier this month and will continue into October at 12 sites in Maryland and 50 in Delaware and New Jersey.

Last year, around 2,300 volunteers collected an estimated 14,000 pounds of trash, including items such as a hockey puck, license plate, mailbox, lawn chairs, snow shovels and bicycles.

While that’s no small amount of waste, it’s down from around 60,000 pounds of trash collected a decade ago thanks to increased public awareness, Likovich said.

“People are getting the message that it pays to be environmentally conscious,” he said, and that’s especially important in communities such as Ocean City where individuals rely on the beach to draw tourists and a thriving economy.

Coastal Cleanup is part of International Coastal Cleanup, sponsored by Ocean Conservancy, a group that works to protect the world’s oceans. It uses the types and amounts of trash collected to help identify sources of debris and explore ways to cut litter.

The initiative began 28 years ago with Delaware’s Get the Drift and Bag It program, which Delmarva Power took over four years later. The local Coastal Cleanup has since grown to cover shorelines from Pennsylvania to Maryland, Likovich said.

Ocean City’s cleanup launches at 10 a.m. tomorrow at City Hall, on Baltimore Avenue at Third Street. Volunteers can register in advance by calling city Environmental Engineer Gail Blazer at 410-289-8221 or can register onsite the day of the event. The town will provide trash bags and plastic gloves for the cleanup, which takes place throughout the city. Volunteers can came back to City Hall after their work for drawings and giveaways until about 12 p.m., Blazer said.

Those in lower Worcester County can volunteer at the Nassawango Creek cleanup at 9 a.m. tomorrow at the intersection of Route 12 and Old Stage Coach Lane in Snow Hill, about 9 miles from the Town of Snow Hill or Salisbury. Contact The Nature Conservancy’s Joe Fehrer at 410-430-1743 to register in advance or show up that morning to sign up onsite.

The cleanups usually last from two to two-and-a-half hours. Volunteers should bring their own gloves, bug spray, sun screen and water. Trash bags will be provided.

All volunteers get a free Coastal Cleanup T-shirt bearing this year’s logo, as supplies last.

“It’s a community event. It’s an opportunity for people to get together,” Likovich said.

“People feel good about what they can offer,” Blazer said.