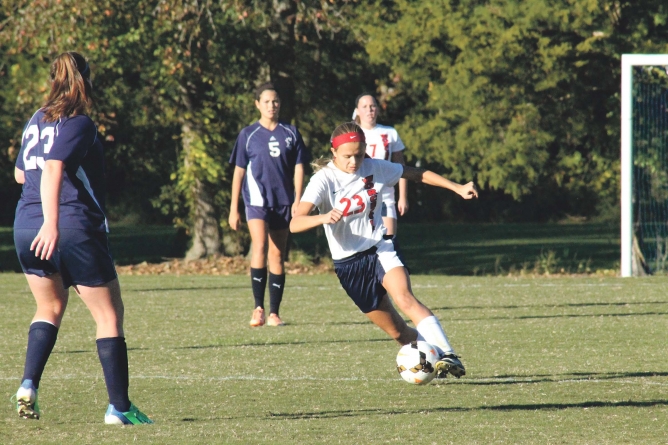 (Oct. 31, 2014) Scoreless after 99 minutes of play, the Eastern Shore Independent Athletic Conference girls’ soccer championship on Monday nearly came down to penalty kicks. But the Sts. Peter & Paul Sabres netted a shot with 48 seconds left on the clock in the second 10-minute overtime period for the victory over Worcester Prep.

“Our kids played great. They couldn’t have played harder,” said Prep Coach Carol Hartnett. “I can’t ask for the kids to do any more than they did…One game does not define a season.”

The coach also said senior Amanda Gabriel did a tremendous job. She’s only been back on the field for about three weeks after being sidelined all season due to residual effects from a concussion suffered last season.

About 34 second before halftime, Gabriel netted a free kick, but the goal was called back. While one referee blew his whistle to give her the go-ahead to kick, the other referee was moving Sts. Peter & Paul players back 10 yards from the ball. That ref did not hear the other blow his whistle and was obstructing the ball and interfered with the play.

The Mallards also lost defender Maggie Coutu, a sophomore, to an ankle injury late in the first half. Freshman Kendall Holmes filled in and Hartnett said she did a great job.

The Mallards advanced to the championship game after pulling out a 3-2 victory in the semifinals over the Salisbury School Dragons last Thursday in Berlin.

Salisbury led 1-0 at halftime. Sophomore Madison Bescak netted the equalizer. Salisbury went ahead 2-1, but Bescak answered. With about two minutes on the clock, junior Julia D’Antonio gave the Berlin squad a 3-2 advantage.

“It was a tremendous season. A season of growth,” Hartnett said. “I’m happy with the team’s overall performance the whole season. The girls came together and the older kids were nice leaders. It was a great journey.”

Worcester was also presented with the Sportsmanship Award.