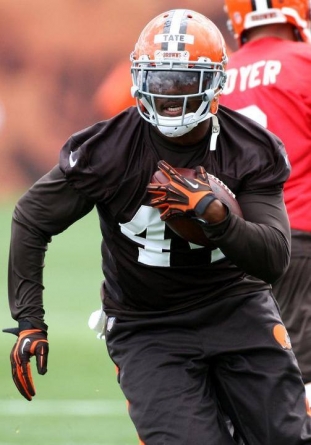 (June 20, 2014) Just like many young local athletes, Ben Tate grew up playing football on fields in the area. Now a professional football player, the Cleveland Browns’ running back has not forgotten his roots.

He will host his second “Ben Tate Experience,” Saturday, June 21 in Fruitland and Salisbury. The activities include a free football camp, basketball skills clinic, three-point and slam dunk contests and a Streetball Legends vs. Hometown Greats celebrity basketball game.

The inaugural camp in 2012 drew more than 300 football players. Tate said Wednesday he expects about the same number of participants this year.

The free football camp, for ages 9-18, will take place from 8:30 a.m. to 3 p.m. at Falcon Youth Sports Complex in Fruitland, located just south of Salisbury. According to www.btate44.com, invited guests include associates, former coaches, NFL colleagues and Tate’s friends.

Tate said several of his teammates are scheduled to attend.

The camp, supported by Falcon Youth Sports, will include orientation and keynote speech, training fundamentals of the pros and position training. Athletes will have the opportunity to ask questions and learn about Tate’s and his teammates’ experiences and what it takes to get to the professional level.

At the end of the day, the group will go over what they learned, he said.

Parents are encouraged to attend.

As of Wednesday, there was still openings for the camp. Visit www.btate44.com for more information.

“It’s a good day for the community to come out and interact with me and some of my teammates,” Tate said.

Later that day, a variety of activities will take place at James M. Bennett High School in Salisbury.

At 4 p.m. there will be a free basketball skills clinic with “Streetball Legends.” Some of the legends scheduled to attend are “White Chocolate,” “Pat The Roc,” “The Future” and “D-Nice.”  They will battle “Hometown Greats” Aaron Wyatt, Craig Winder, Landon Milbourne and Andre Foreman, among others, in a celebrity basketball game that night.

A three-point shooting contest and slam dunk competition are also planned. “Big Pat,” voice of the Charlotte Bobcats, is slated to attend.

For more information, contact Shy-Lights at 443-366-5945. Admission cost is $5. Proceeds from the evening will benefit the Ben Tate Foundation. Tate said it is important for him to give back to the communities that have supported him over the years, which is why he started the foundation. The organization was created to empower youth to take ownership and pride in the roles they play in society. The foundation does a number of charity acts, such as providing food and gifts during Christmastime to families in Worcester, Wicomico and Somerset counties.

July 11-12, Tate plans on hosting the “Best on the Shore” 7-on-7 basketball tournament in the Salisbury area for Maryland and Delaware high school teams. The cost is $20 per player. Coaches can download a team entry form at www.btate44.com.

Tate was also a standout at Auburn University. He finished fifth on Auburn’s career rushing list (3,321 yards rushing, 24 touchdowns). He graduated with a degree in criminology.

Tate was drafted in the second round of the 2010 NFL Draft by the Houston Texans. He was with the team for four seasons. In March, Tate signed with the Cleveland Browns.

On April 6, Tate posted on Facebook: “Excited [about] this new chapter…determined to make it one of the best chapters.” The comment was accompanied by a “Tate” No. 44 Cleveland Browns jersey and helmet.

“I love playing football. I can’t wait for the season to get started,” Tate said Wednesday.

His goal is to “do whatever it takes to win games.”

“I’ll do whatever my team needs me to do,” he said.