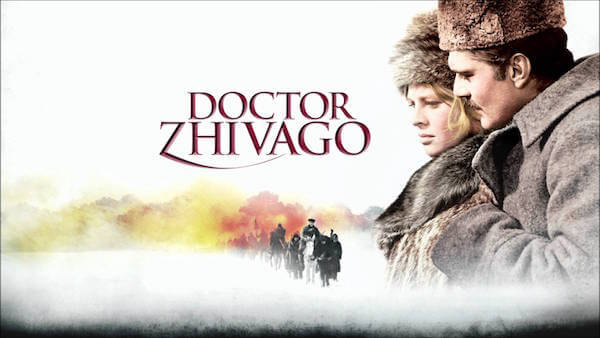 “In America there is plenty of light beer and you can always find a party. In Russia, party always finds you.”

There is a film that has totally engrossed the pop culture. Tweens walk out of Hot Topic wearing its logo on their t-shirts. Fans chant its theme at sporting events. Walt Disney Studios has acquired the rights and is developing an expansive cinematic universe based on it. That film is, of course, not Doctor Zhivago.

No, I don’t think I had even heard of this film before I set out to watch and review it. If I had, I have no recollection of it. The film takes place in Russia between 1917 and around 1950 and takes the audience through World War I, the Russian Revolution, and the Russian Civil War. Despite this, Zhivago is not a war film and the various conflicts function more as a backdrop and device to explore various human themes.

Zhivago is an old-fashioned epic, directed by David Lean who also helmed Lawrence of Arabia and The Bridge on the River Kwai. As such, the film is sweeping and grand. Because of the war-time backdrop and the heavy themes of romance and plight on the aristocracy (the bourgoise really get kicked around in these films, what gives?), it plays somewhat like Gone With the Wind in Russia. Lean’s direction is one of the best parts of this film. The visuals are well done; much of what passes for the Russian countryside was filmed in Finland, Spain and Canada, due to the Soviet Union’s banning of both the film and the Pastenak novel on which it was based. These scenes are just glorious, especially if, like me, you’re a sucker for a good landscape. Much of the camera work and staging is quite inventive too. One scene in particular stands out as an example. In this scene, the camera tracks up and rests on a frosted window, with a glowing impression of a candle flame behind it. Over the course of several moments, the heat from candle flame slowly melts the frost and allows us to see, but not hear, what goes on inside: a scene of domestic dis-bliss (made up that word, hope you like it).

Some critics have argued that in not focusing more on the communist revolution and the socio-political weight of it, the film trivializes it. In my view, Zhivago (the film, not the book) is a story about a few people impacted by these events, not the conflict itself. Moreover, its about life and the value we place on life. The titular Dr. Yuri Zhivago, played by Omar Shariff, cherishes life and its sanctity, opposed by the new communist regime which measures life by what it can contribute to the state. On the other hand, I found little truly noteworthy in the human drama. The trials which the characters go through, the injustices they suffer, and the tragedy that strikes them is kind of engaging and well handled, but not particularly interesting or compelling.

Like the plot, the performances are serviceable, but nothing special. Shariff’s pretty face and strong jaw work well to communicate Yuri’s purity and virtue, but I could easily imagine a number of actors equally suited to the role. Alec Guiness and Tom Courtenay both do well as intimidating yet distinct military officials. The female leads, Julie Christie as Lara Antipova and Geraldine Chaplin as Tonya, get the short end of the stick. Christie spends the film either dominated by bad men or swooning over Yuri Zhivago, with little character of her own on display. The stuff they did with the character could have been interesting, if handled more thoughtfully. Moreover, Chaplin’s character seems almost incidental to the actual plot, existing primarily as motivation for Yuri. There are two performances that do stand out, and they are Rod Steiger as an imposing well-connected jerk, and Klaus Kinski who, while only present for one sequence, leaves an impression.

Doctor Zhivago is worth the watch. The film’s treatment of human suffering in the midst of authoritarian communism delivers a strong message without falling into outright propaganda. The filmmaking is quite impressive and several sequences are flat-out awe-inspiring (particularly the funeral scene toward the beginning). Beware, just as the visuals and themes are epic in scale, so is the runtime, coming in at over three hours, and my copy did not include an intermission. If you want to take in a well-renowned but rarely discussed classic with a wonderful score and artistic direction, definitely check out Doctor Zhivago.

Doctor Zhivago is playing at the Clayton Theatre on Monday, February 29th at 7 pm in Dagsboro Del.

Steven grew up in north Ocean City but now lives in Nanticoke Maryland, 20 minutes outside of Salisbury. He currently attends Salisbury University and is finishing up his bachelor's in film. Fascinated by motion-picture as a form, he's especially interested in the evolving relationship between television and film. Steven is a cool dude, and like most cool dudes, Steven spends his time juggling, playing D&D, scrutinizing sketch comedy, and jamming on the spoons and rhythm bones to Earl Scruggs. Steven loves grapefruit.