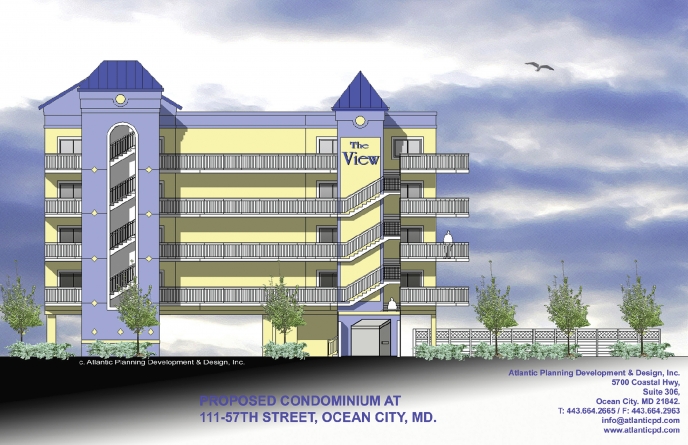 (May 10, 2013) Ocean City’s Planning and Zoning Commission this week approved plans for a new condominium on 57th Street, which the project’s backers estimate to be the first new condominium project in the resort in more than six years.

“It’s kind of historic. It’s a feel-good for the market,” said Jeff Thaler, whose firm, Atlantic Planning, Development, and Design, is running the project. Thaler is also a partner in the company that is financing the condominium.

“For us, it’s a good test market. We’re not going on the line for 30 units, or for 50 units, like we used to,” Thaler said. The project already has pre-sale commitments from three buyers.

The building will be five stories, with parking on the ground level and four floors above, each with three, three-bedroom units. It will be located on the south side of 57th Street, bay-adjacent, and directly to the west of the Maui Golf mini golf course. The lot is currently occupied by a single-story home and garage that have been unoccupied for several years.

The building will be situated slightly diagonally on the lot, with balconies facing southwest. Because of the state’s “critical areas” policy regarding wetlands, the site has additional setback requirements that increase with the size of the lot.

“I did speak with [city Environmental Engineer] Gail Blazer, and she was confident that we could move forward with the site plans contingent upon the final delineation of those lines by the state,” Assistant Director of Planning and Community Development R. Blaine Smith told the commission.

Although the city, in recent months, has allowed the reinstatement of plans for condominium projects that were designed before the economic downturn but were never built, Thaler’s project will be the first completely new venture in recent years.

But even a relatively modest building is still a significant departure in a market that has been stagnant since before the economic slump of 2008. That impact of that slowdown is still reverberating in the resort real estate industry.

According to data from the Coastal Association of Realtors, the resort had 937 condominium units actively on the market at the end of March, down from 1,163 at the same time last year. Of those, 161 units have been sold through March of this year, versus 173 through the same period last year.

“If you talk to a lot of the Realtors, they’re all saying the same thing, that there’s nothing out there that’s new to sell,” Thaler said. “People keep coming into their office and they have this same stuff from 2001, 2002, even the newest stuff they have on the market is 2005.”

Despite the volume, sales data also indicates that the turnover on units begins to drop sharply past the $300,000 price point bracket.