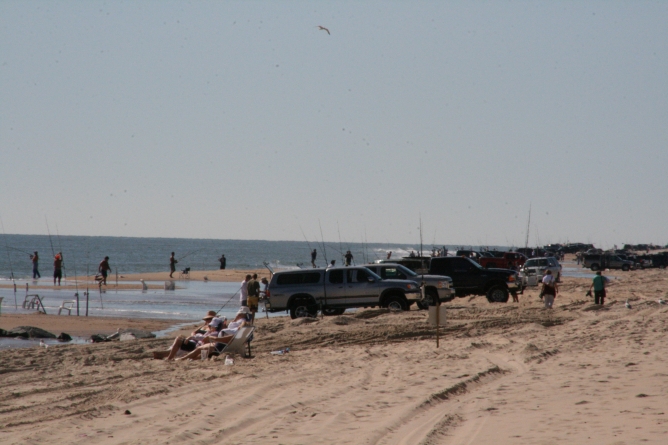 (Oct. 11, 2013) The Town of Ocean City agreed on short notice this week to host a surf fishing tournament after the event’s original location at Assateague was closed by the federal government shutdown.

Bill Justice, president of the Assateague Mobile Sportfishermen’s Association, appealed to the city council this week to hold the AMSA’s annual tournament in Ocean City if the federal government does not reopen Assateague National Seashore by the weekend of the tournament, Oct. 18-19.

“We’re kind of at your mercy here,” Justice said.

The AMSA tournament can host up to 45 teams, Justice said, although only 18 are signed up currently. That number will probably grow to 25 by the day of the tournament, he said, with each team likely brining two vehicles each onto the beach.

“Basically, they’re looking for any area of the beach, wherever we would ask them to be, to have a two-day event,” city Private Events Coordinator Lisa Mitchell said.

City staff estimated that the event would need roughly 15 blocks of beach, Mitchell said, and recommended the area between 30th and 45th streets. Three other events – the American Cancer Society run, OCtoberfest and the Drive in Disguise parade – will be taking place that weekend on the south end of town.

However, the council suggested that the event be moved further north, given some complaints already received regarding the city’s regularly scheduled surf fishing tournament.

“I got some pretty serious complaints about this last weekend, from the standpoint of people trying to enjoy the beach and having their blankets moved, stuff like that,” said Councilman Dennis Dare. “The tournament this past weekend is something we’ve had for years and years, but in the past, when the tournament takes place, the weather has been less than bathing weather, and perhaps the volume of people on the beach last weekend caused the conflict.”

Dare suggested the tournament instead take place from the Delaware line south, so that fewer people would be impacted.

“I, too, received quite a few complaints about the surf fishing tournament last weekend,” Meehan said. “I think Mr. Dare is correct, though, it’s certainly due to the anomaly of the weather.”

The council agreed to allow a north-end location for the AMSA tournament. They also agreed to waive Justice’s application fee, and reduce his beach usage fee to $150 per day instead of the steep $150 per block per day typically charged to large private events.

The body was noticeably gun-shy about how the tournament would be perceived, given the backlash earlier this year when the council proposed selling permits that would allow surf fishing vehicles on the beach throughout the off-season.

“Some people are going to look at this and say, ‘I thought you said you weren’t going to do that,’” Meehan said. “Please know that this is the exception and not the rule. It’ a one-time request, and we’re not looking to bring in more events like this. We’re just trying to help someone out during the shutdown.”